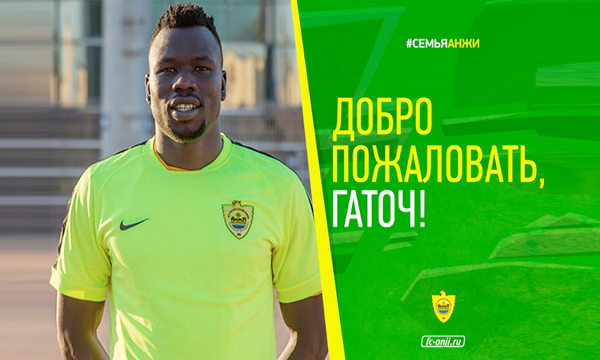 Though the Russian club did not disclose his salary, according to sources, Gatoch will earn EUR 5000, monthly. The same sources revealed that depend on his performance the fee will increase to EUR 10,000 in the second year and EUR 15,000 in the third year.

Gatoch was in Moscow on Wednesday for trials with the club. The transfer would make Gatoch the first Ethiopian to play in Russia.

Gatoch’s agent, David Beshah, said that they have held discussions with the side and that the deal has been sealed, five days after his trial stint with Anzhi.

David, who was a former Ethiopian National Team player and Ethiopia Coffee fullback, told Soccer Ethiopia that Gatoch’s move to Anzhi will open doors to other Ethiopian players.

“We are very delighted with the move. He is a talented lad and I knew he would seal a move to Anzhi. I hope this move would be a stepping stone to other Ethiopians to follow suit.” David said.

Gatoch will now jet off with the rest of the Anzhi squad to Slovenia next week for the start of a pre-season camp tour which will see the club face various local sides. Meanwhile, this signing considered as the icebreaker for other Ethiopian players.

Gatoch was scouted by Seyoum Abate of Ethiopia Coffee at a young age. Then, in January 2014, Sewent Bishaw invited him to be part of Ethiopia’s squad for the 2014 African Nations Championship. The team was eliminated in the group stages after losing to Congo, Libya and Ghana.

Last year Commercial Bank of Ethiopia young midfielder Biniam Belay was in Germany for trials but could not be able to secure any deal. Shimelis Bekele of Petro Jet and Omod Okuri of El Entag El- Harby Egypt are players playing in a foreign league.

Anzhi has been home to top stars like multiple African Player of the Year Samuel Eto’o of Cameroon, former Brazilian full back Roberto Carlos and Democratic Republic of Congo’s Christopher Samba.

Football Club Anzhi Makhachkala is a Russian football club based in Makhachkala, capital of Dagestan. Founded in 1991, the club competes in the Russia Football Premier League, playing their home games at the Anzhi-Arena.

On 18 January 2011, Anzhi Makhachkala was purchased by billionaire Suleyman Kerimov, and subsequently made numerous high-profile signings, including those of striker Samuel Eto'o and manager Guus Hiddink. Following severe budget cuts ahead of the 2013-14 Russian Premier League season, the club lost most of its key players and went on to finish bottom of the table, which resulted in relegation to the Russian National Football League at the end of the season, returning at the attempt. (The Reporter)