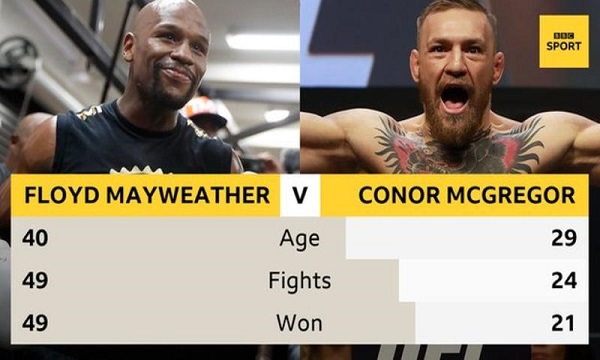 August 23, 2017 (GSN) - At the top of the MGM Grand on the Las Vegas strip is a huge advert for the magician David Copperfield, the hotel's star attraction.

But the tagline - Alter Your Reality - could easily be used to promote the fight between Conor McGregor and Floyd Mayweather, which will dominate the sporting landscape this weekend.

Thus far it has engendered a mix of intrigue and revulsion from observers. Whether you like it or not, this is a sporting event that cannot be ignored.

Las Vegas is a city that constantly beguiles visitors into altering their perceptions - and, at times, their common sense - in a haze of hedonistic pleasures. Mayweather v McGregor, with its unabashed glorification of money, image and bravado, fits perfectly within the daily excesses of the world's gambling capital.

Saturday's fight will pit a man widely considered one of the greatest exponents of his sport against a mixed martial artist who has never boxed professionally.

The outcome should be simple to determine, no matter McGregor's mantra and hubristic claim he is ready to "shock the world".

But remember this is Vegas. And many believe McGregor's sleight of hand against an ageing Mayweather could provide a major upset. It will be no illusion if he does win, ranking as one of the greatest shocks in sporting history.

The debate as to who will triumph will sway back and forth in the coming days - pumped up, no doubt, by yet more hateful invective from the two chief protagonists.

The true verdict can only be delivered in the ring, in what is likely to be the richest fight in boxing history.

Fans out in force to see McGregor & Mayweather

Tickets for the venue have not yet sold out - but with an expected five million pay-per-view purchases, the cash will cascade in from those sitting watching at home and at venues around the world.

The smell of money permeates the Las Vegas strip at the best of times. This week, the stench is inescapable.

Both fighters and their camps have been candid in admitting the contest is all about the cash. However, the language they have used to boost their mega pay day has been disgraceful.

A five-city publicity tour in July became a nauseating race to the bottom as each man tried to find fresh insults to hurl at one another.

Homophobic put-downs, and racially motivated slurs and stereotypes have soured the build-up to this contest. It was difficult not to wince when McGregor turned to his opponent on the final leg of the tour at Wembley and told him to "dance for me, boy".

However, both men are equally culpable given their behaviour.

Dana White, the UFC president who is representing McGregor, believes it is all justified.

"It's funny when people say they've taken this thing too far," he said.

"This is a fight, not a croquet game. This part of the deal; the reality is what's going on here is just as much part of the fight as the fight itself, the mental warfare game."

It is at this point the true reality of this contest has not been altered but frankly obliterated.

Context is everything and this fight is not taking place in a vacuum. The US is scarred and still reeling from recent events in Charlottesville, Virginia, where white supremacists marched with burning torches and gave Nazi salutes.

It is a country still deeply fractured along racial lines.

It is a country where prejudice - and the fight against it in all its forms - is a near constant part of the national conversation.

In their own small way, both Mayweather and McGregor, with every hateful word uttered, are expanding the pool of division that already exists in this country.

Surely sport should be the place where differences can be set aside? This contest provides an opportunity for examples to be set but it has, so far, been wasted.

Trash talk and one-upmanship is one thing. It has always been a part of prize fighting.

Language that divides and excludes - that seemingly legitimises homophobic, sexist and racist behaviour - is something else entirely.

They certainly aren't the first boxers to trade in such terms.

Though both men later apologised, Manny Pacquaio shamefully called people in same-sex marriages "worse than animals", while Tyson Fury expressed a Neanderthal view that a woman's best place is "on her back or in the kitchen".

The truth is boxing offers girls and boys a chance to build self-esteem, to train and dedicate themselves to a higher goal. It provides hope, and often an escape, for many.

You just have to listen to Mike Costello and Steve Bunce's recent podcast from the burnt-out Grenfell Tower to see what boxing can do for a community. The building housed a gym with volunteer coaches, all unpaid, giving their time and knowledge to help transform lives. The hope is it can rise again.

But some of the most powerful men at the top of the sport have failed time and again to see the gift they possess to inspire and encourage everyone, of all backgrounds, to get involved.

Mayweather and McGregor, cosseted in their elite world of Lamborghinis, Louis Vuitton luggage and flashy Las Vegas nightspots, appear to have forgotten this too.

Their humble beginnings at gyms in Michigan and Dublin respectively should serve as a reminder of the chances they were provided with.

Their respective combat sports have given them untold riches. This week their bank accounts will swell further.

With no boxing federation overseeing the bout and the Nevada State Athletic Commission - which sanctioned the fight - refusing to get involved, both Mayweather and McGregor can act however they wish.

Even the UFC, in which McGregor made his name, has allowed the Irishman's actions to go unchecked of late. His volatile behaviour before recent events has seen him throw bottles and even try to hurl a chair at an opponent.

There is arguably a responsibility for the two most recognisable figures in combat sports to be more guarded with their words and to realise they are custodians; to extol the virtues of the sport that has given them everything.

Their most dangerous weapons, it seems, are not their fists but their tongues.

No-one expects them to be angels - the true, unaltered reality this week is they have a fight to sell and money to make. And on Saturday a truly intriguing sporting contest will take place.

What happens in Vegas should, according to the old saying, stay in Vegas. Hopefully that also applies to the hateful rhetoric of this unavoidable fight. (BBC)