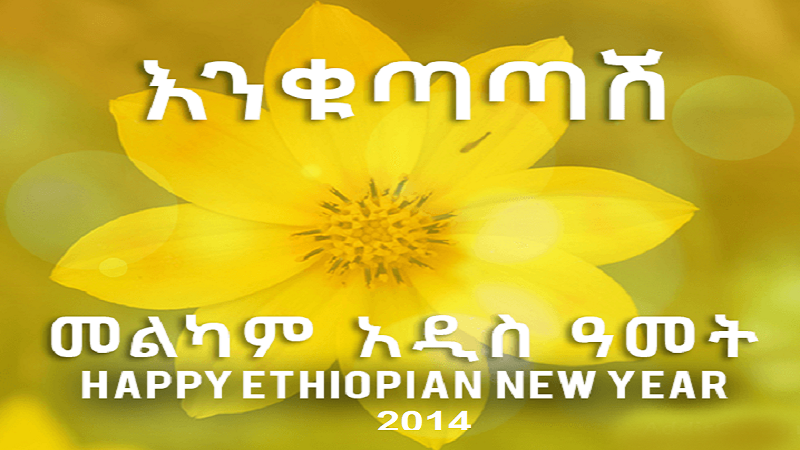 September 11, 2021 (GMN) - Not only that the Ethiopian calendar is also seven years and eight months behind the Western calendar.

This is because it calculates the birth year of Jesus Christ differently. When the Catholic Church amended its calculation in 500 AD, the Ethiopian Orthodox Church did not.

So, the new year falls on 11 September in the Western calendar, or 12 September in leap years, at the start of spring.

Unlike children growing up elsewhere, there is little need for Ethiopian youngsters to learn rhymes to remember how many days each month has.

In Ethiopia it is simple: 12 months each have 30 days and the 13th - the last of the year - has five or six days, depending on whether it's a leap year.

Time is also counted differently - with the day divided into two 12-hour slots starting from 06:00, which would make both midday and midnight six o'clock in Ethiopian time.

So, if someone arranges to meet you in Addis Ababa at 10 o'clock for a cup of coffee - Ethiopia is after all the birthplace of the arabica bean - don't be surprised if they rock up at 16:00.

Italy tried to invade Ethiopia, or Abyssinia as it was also known, in 1895, when European powers were carving up the African continent between themselves - but it went on to suffer a humiliating defeat.

Italy had managed to colonize neighboring Eritrea after an Italian shipping company bought the Red Sea port of Assab. Confusion following the death in 1889 of Ethiopian emperor Yohannes IV then allowed Italy to occupy the highlands along the coast.

But a few years later when Italy tried to push further into Ethiopia, it was defeated at the Battle of Adwa. Four brigades of Italian troops were overcome in a matter of hours on 1 March 1896 by Ethiopians serving under Emperor Menelik II.

One of Menelik's successors, Emperor Haile Selassie, capitalized on his Italian victory by pushing for the creation of the Organization of African Unity (OAU), now the African Union, which has its headquarters in Ethiopia's capital, Addis Ababa.

"Our liberty is meaningless unless all Africans are free," Selassie said at the OAU's launch in 1963, a time when much of the continent was still ruled by European powers.

He invited those leading the fight against colonialism for training - including South Africa's Nelson Mandela who was granted an Ethiopian passport, which allowed him to travel around Africa in 1962.

Mandela later wrote about the special place Ethiopia held for him ahead of the trip: "I felt I would be visiting my own genesis, unearthing the roots of what made me an African."

This stems from a quote in 1920 from influential Jamaican black rights leader Marcus Garvey, who was behind the Back to Africa movement: "Look to Africa, when a black king shall be crowned, for the day of deliverance is at hand."

A decade later, when 38-year-old Ras Tafari (or Chief Tafari) was crowned Ethiopia's Haile Selassie I, many in Jamaica saw this as the prophecy coming true, and the Rastafari movement was born.

Reggae legend Bob Marley was instrumental in spreading the Rasta message and the lyrics to his song, War, quote the emperor's address to the UN General Assembly in 1963 calling for world peace: "Until the philosophy which holds one race superior and another inferior is finally and permanently discredited and abandoned… until that day, the African continent will not know peace."

The title track of Marley's Exodus, named by Time magazine as the album of the 20th Century, reflects the Rastafari desire to return to Africa, which millions of people were forced to leave during the transatlantic slave trade.

To this day a small Rastafarian community lives in the Ethiopian town of Shashamene, 225km (150 miles) south of Addis Ababa, on land granted by Selassie to black people from the West who had supported him against Mussolini.

Selassie, an Orthodox Christian, may not have been a Rasta believer, insisting that he was not immortal, but Rastafarians still revere him as the Lion of Judah.

This is a reference to Selassie's alleged lineage, which Rastafarians, and many Ethiopians, believe can be traced back to the biblical King Solomon.

Home to the Ark of the Covenant

For many Ethiopians, the sacred chest holding the two tablets with the Ten Commandments which the bible says were given to Moses by God is not lost  Hollywood's Indiana Jones need only have gone to the city of Aksum.

The Ethiopian Orthodox Church says the ark is under constant guard on the grounds of Aksum's Our Lady Mary of Zion Church, where no one is allowed to see it.

Tradition has it that the church has this precious relic thanks to the Queen of Sheba, whose existence may be disputed by historians, but generally not by Ethiopians.

They believe she traveled from Aksum to Jerusalem to visit King Solomon to find out more about his reputed wisdom in around 950 BC.

The story of her journey and seduction by Solomon are detailed in the Kebra Nagast epic (Glory of the Kings) an Ethiopian literary work written in the Ge'ez language in the 14th Century.

It tells how Makeda, the Queen of Sheba, gave birth to a son - Menelik (meaning Son of the Wise) - and how years later he traveled to Jerusalem to meet his father.

Solomon wanted him to stay and rule after his death but agreed to the young man's wish to go home, sending him back with a contingent of Israelites one of whom stole the ark, replacing the original with a forgery.

When Menelik found out he agreed to keep it, believing it to be God's will that it stays in Ethiopia and for the country's Orthodox Christians it remains sacred and something they are still willing to protect with their lives.

This was evident last year when, during the conflict that has erupted in Ethiopia's northern region of Tigray, soldiers from Eritrea reportedly tried to loot Our Lady Mary of Zion Church in the aftermath of a horrific massacre.

A civil servant in the city told the BBC that young people ran to the site to protect the ark: "Every man and woman fought them. They fired guns and killed some, but we are happy as we did not fail to protect our treasures."

Home to first Muslims outside Arabia

"If you were to go to Abyssinia, you will find a king who will not tolerate injustice," the Prophet Muhammed is said to have told his followers when they first faced persecution in 7th Century Mecca, in modern-day Saudi Arabia.

This was at the time the prophet had just begun his sermons, which proved so popular that he was seen as a threat by the city's non-Muslim rulers.

Taking his advice, a small group set off to the Kingdom of Aksum, which then covered much of present-day Ethiopia and Eritrea, where they were indeed welcomed and allowed to practice their religion by the Christian monarch Armah whose royal title in Ge'ez was Negus, or Negashi in Arabic.

The village of Negash, in what is now Tigray, is where these migrants are thought to have settled and built what is considered by some to be the oldest mosque in Africa. Last year, the al-Negashi Mosque was shelled during the fighting in Tigray.

Local Muslims believe that 15 disciples of the prophet are also buried in Negash. In Islamic history, this move to Aksum became known as the first Hijra or migration. Today Muslims make up nearly 34% of Ethiopia's more than 115 million inhabitants.