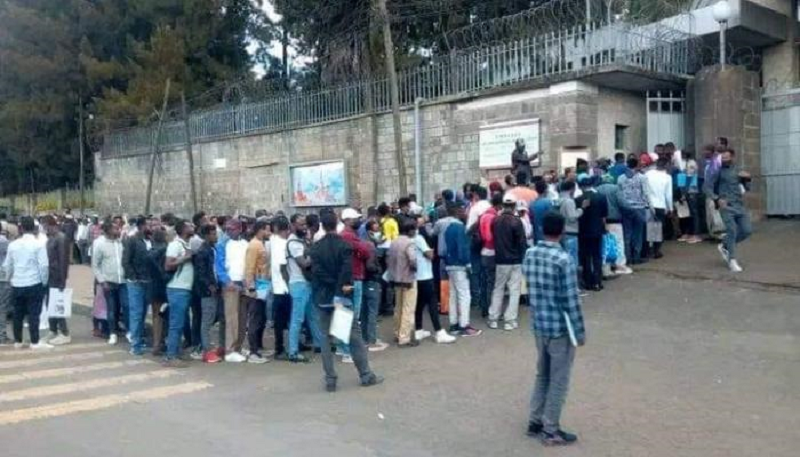 April 21, 2022(GSN) - Hundreds of Ethiopians reportedly have been lined up for days outside the Russian embassy in Addis Ababa this week in hopes of being recruited to fight for Moscow in its invasion of Ukraine.

But the embassy has dismissed claims it is recruiting foreign fighters and says the Ethiopians are there to show their solidarity with Russia.

Witnesses say the embassy is not bringing the hopefuls inside but say staffers have come outside to take documents.

Feleke Gebrekidan was among the Ethiopians who have spent long hours waiting outside the embassy. He has military experience, he said, having served in the Ethiopian military for over a decade.

He said the would-be recruits are former members of the Ethiopian army, who do not have jobs at the moment. Having heard that the Russian embassy is currently recruiting, he said he and others came with their credentials. He said he even brought the clearance he received after serving in the military.

Feleke said he has been at the gate of the embassy for three days but had not managed to get inside. He said he plans to come back and try again.

Tewodros Sime, who lives next to the Russian embassy in Addis Ababa, said he is not happy to see his fellow citizens volunteering for the war.

“Why would I fight on behalf of a foreign nation?” he asked. “I was so angry when people poured in for registration to the embassy. Many did not show up when the Ethiopian ministry of defense was calling [men] to join our army. They are now bowing to Russians and I am so sad about it. We should prioritize peace in our country.”

Some of the volunteers are motivated by economics. They are desperate to get a job, even a potentially deadly job overseas because they are unemployed.

Also, most Ethiopians see Russia as a friendly nation politically. In the 1980s, Ethiopia was under communist leadership, and there are thousands of Ethiopian military personnel who were trained in what was then the Soviet Union.

Maria Chernukhina, the press attached for the Russian embassy in Addis Ababa, speaking to VOA, acknowledged that some of those in line are carrying documents but said that this reflects their own willingness and hope. She said the Russian embassy is not recruiting people for any purpose, as that would not comply with its responsibility as a diplomatic mission.

Since the war began, she added, Ethiopians have been calling and emailing the embassy to voice their solidarity with Russia. Coenriching said the line outside the embassy is also part of that.

Contacted by VOA, the Ukrainian embassy in Addis Ababa declined to say anything about the lines. The Ethiopian Foreign Ministry did not respond to a request for comment. (VOA)