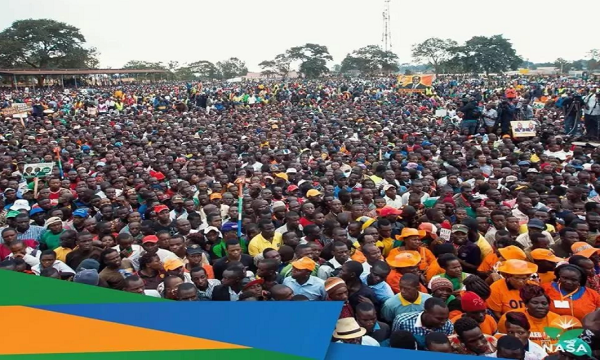 A lobby group from Nyanza has vowed to derail Kalonzo Musyoka's presidential bid in 2022.

Nairobi, June 23, 2017(GSN) - The group says that Luos who are supporting Raila Odinga are not part of the MoU struck among the five NASA principals and will therefore not be forced to vote against their wishes in 2022.

When NASA unveiled the flag-bearer, it was revealed that Raila will be a transitional president with Kalonzo taking over in 2022.

The lobby also threatened to vote out Raila Odinga if he insisted on the 6-piece voting pattern A lobby group from Raila Odinga's home turf has threatened to boycott Kalonzo Musyoka's presidential bid in 2022.

The group termed Kalonzo Musyoka as an enemy of the people and promised to expose his dirt in the days to come.

During the negotiations for a NASA flag-bearer, Kalonzo claimed that he had entered an MoU with Raila that in 2017, Raila would back him up for the top job.

fter endless meetings and deliberations, the mantle was passed to Raila with the promise that Kalonzo would have his day after Raila retires in 2022.

n a Facebook post seen by TUKO.co.ke, the group said that Luo's have suffered in the past during political skirmishes and were likely to suffer more if any political tiff degenerated into violence.

The chairperson noted that over 600,000 Luos were displaced in 2007 with hundreds dying in the attacks.

n addition to punishing Kalonzo Musyoka in 2022, the group has also promised to vote out Raila Odinga if he insists on the 6-piece voting pattern. " Gladys Wanga and Oburu Odinga are championing ODM 6 piece movement. Gladys is the point person for South Nyanza while Oburu is point person for Central Nyanza," the statement reads.