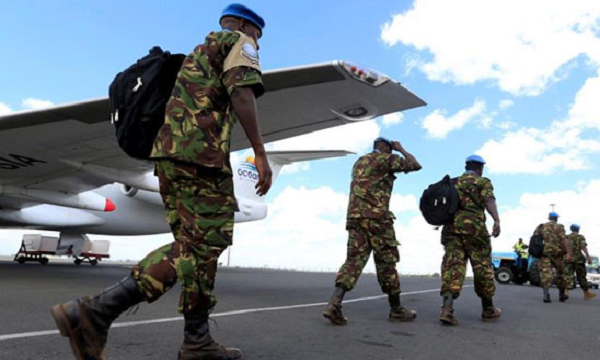 Juba, 07 August 2017 (GSN) -Daniel Dickinson confirmed on Sunday that 123 forces of a unit of the RPF from Rwanda arrived on Saturday and Sunday.

A unit of the Regional Protection Force (RPF) has arrived South Sudan according to the Spokesperson of United Nations Mission in South Sudan, UNMISS. He said other units are expected to arrive later in the coming months.

“123 Rwandan troops arrived this weekend, Saturday and Sunday,” he said. “These are the ones that have arrived this weekend, there will be more coming but not in the next few days.” The 123 Rwandan forces add to the number of 150 Nepalese already in Juba. The arrival of the Regional Protection Force comes days after the Undersecretary General of United Nations Peace Keeping Operations; Jean Pierre Lacroix visited the country last week. Lacroix discussed with government officials the security situation, visited protection of civilians’ camps, and advocated for a nation-wide cease fire.

The Special Representative of the Secretary General, David Shearer had announced the arrival of the RPF last month after signing a memorandum of understanding with the government on a base of deployment for the RPF. He had referred to the deal as "significant positive step forward" and one that will give the U.N. the "flexibility to extend its presence into areas beyond Juba where peacekeepers may be needed.” Mr. Shearer had revealed that Ethiopian troops would be coming in September and November.

The 4,000 force  was authorized by the United Nations Security Council in November last year to protect civilians and their property after fighting between soldiers loyal to the then First Vice President Dr. Riek Machar, and those loyal to President Salva Kiir Mayardit clashed in the presidential palace. In response the UN Security Council authorized the deployment of an additional 4,000 troops from East Africa with a stronger mandate than the 16,000-strong UN peacekeeping mission UNMISS. The fighting that ensued spread to other parts of the country, forcing thousands of civilians to flee their homes in to refugee camps.

However, immediate deployment of the force stalled due to disagreement between the UN and the government over their location of deployment, and the types of weapons they would bring to the country. The government had also initially opposed the deployment of additional troops as a breach of national sovereignty but later agreed to their deployment on September 4. The long-awaited RPF peacekeepers will arrive in South Sudan nearly a year after they were approved by the UN security council in August last year. The 4,000-strong force is meant to protect civilians from the gang rapes and other abuses seen during the fighting that erupted in the capital, Juba, a year ago. The civil war nearing its fourth year, with more than 50,000 people killed, and over 1 million displaced as refugees.