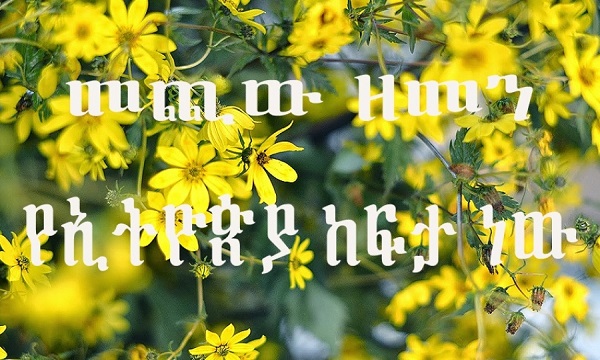 Addis Ababa, September 11, 2017(GSN) - Ethiopia, with its own calendar, will be starting its New Year 2010, today, and citizens were yesterday busy preparing for celebrations.

Ethiopia has its own calendar with 13 months, and each of the 12 months has 30 days, and the 13th month called Pagumen has five days, which becomes six in each leap year.

The Ethiopian New Year comes at the time when the heavy rainfall starts to cease, and the bright sun comes to shine over the green land, which is also covered by the golden flower known in Amharic language as “Adey Abeba”. As it comes with change of the season, the New Year in Ethiopia is celebrated with new hope, and the people are making special preparations.

The celebration of the holiday started on the eve, whereby each household or neighbours in (group) lit wooden torches locally called “chibo” in Amharic language, which symbolises the coming of the new season of sunshine after the end of the cloudy (rainy) season that has prevailed since June.

The Ethiopian New Year is accompanied by songs of girls who play, among others, the well-known Amharic song called “Abebayehugn” which literaly means “I have seen flowers”, still heralding the end of the rainy season and that the land is covered by the golden flower “Adey Abeba”, which appears in abundance this time. The girls, who are well-dressed and adorned, go from house to house and play the song with hand-drum.

Boys, mainly in urban areas, go from house to house to present pictures, painted by themselves, of angels or famous figures in the world, saying “Happy New Year.”

It has been the custom here that when the girls come to sing the New Year song, the boys present the New Year gifts (paintings), and heads of households provide small amounts of money as gifts.

At household level, families purchase chicken, sheep, goats, and oxen while preparing special bread locally called “Diffo” in Amharic language, as well as drinks of house-made beer, “Tella”, and a honey-wine “Tejj”. The coffee ceremony, though it is held at ordinary times at household level, is now conducted differently and colourfully.

On the main day, when the New Year starts, families sit together around tables to enjoy the special dishes prepared for the feast; relatives and neighbours visit each other and exchange special greetings of the season, and dine together.

On New Year’s eve, Xinhua journalists went out to some sheep and chicken markets in Addis Ababa.

Ethiopia has organised events at national level for 10 consecutive days launched on September 1 to welcome the New Year. ( Xinhua)