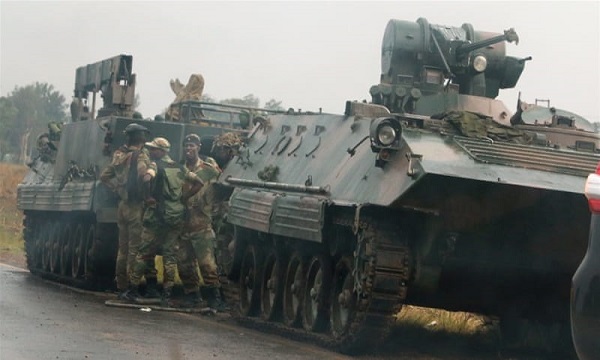 November 15, 2017(GSN) - Zimbabwe's military has seized state TV and blocked off access to government offices in the capital Harare.

In a televised address early on Wednesday morning, military spokesperson, Major General SB Moyo, said the army was seeking to "pacify a degenerating, social, and economic situation" in the country.

Moyo denied that the army was carrying out a coup against President Robert Mugabe's government and said the leader and his family were "safe and sound and their safety is guaranteed".

"We are only targeting criminals around him who are committing crimes that are causing social and economic suffering in the country, in order to bring them to justice" he said, as tanks surrounded parliamentary and presidential buildings.

he army spokesperson said that once the military's objectives have been achieved, the situation in the country would return to normal, before urging Zimbabweans to continue with their lives as usual.

Moyo also called on political parties to "discourage" their members from turning to violence.

"To the youth, we call upon you to realise that the future of the country is yours, do not be enticed by the dirty coins of silver, be disciplined and remain committed to the ethos and values of this great nation."

Overnight, the Zimbabwean newspaper The Herald, which leans towards Mugabe, ran with the headline: "Zanu-PF unfazed by Chiwenga", referring to the army general leading the takeover.

On November 14 Zanu-PF accused the army chief of "treasonable conduct" after he challenged Mugabe over the sacking of the vice president.

Al Jazeera's Haru Mutasa, reporting from Harare, said that while Mugabe has long ruled the southern African state, there was precedent for his removal from within the party's history.

"This maybe history repeating itself, back in the Liberation war (1964-1979), Zanu PF was led by a Mr (Ndabaningi) Sithole," she said, referring to the founder of Zimbabwe's ruling party.

"The military wing of the party back then got to a stage where they thought that he was treating the party as his own personal property and they removed him and it seems that's what they've done to Mugabe today."

Enock Muchinjo, a journalist in Harare, said the situation in the city was "very tense" with troops on patrol in civilian areas.

"The streets are empty and people haven't reported to work in fear of what is happening," he said.

Muchinjo said by around 8:30AM (6:30 GMT) people had started "trickling in" to the streets, almost an hour and a half after business normally starts.

For many the first priority was to head to the banks, reflecting fears many Zimbabweans have over the impact this burgeoning crisis may have on the economy.

"I fear for my small business, my extended family depends on it for a livelihood."

Martin Muradzikwa, a mobile phone shop owner in Harare, told Al Jazeera he feared clashes between soldiers and Mugabe loyalists would break out.

"I'm worried there may be running battles in town today between soldiers and President Mugabe's supporters," he said.

"My wares won't be safe but I just had to open shop, I cannot afford not to.

"I fear for my small business, my extended family depends on it for a livelihood."

Al Jazeera also spoke to critics of Mugabe, who said they had reservations about the military's intervention in politics.

"I've never trusted the military," said one supporter of the opposition Movement for Democracy and Change (MDC).

"They've stood by the (Mugabe) regime for many years. I'm on their side on this one though, I know they have their own interests in wanting change (but) at least we share a common enemy," said the MDC supporter, who did not wish to be named.

Nii Akuetteh, an African policy analyst based in Washington, told Al Jazeera that the military would be keen not to portray their actions as a coup in order to avoid attracting opposition.

"However, looking at their actions there is no way to call it another thing. If it is not a coup, the military should be back in their barracks," he said, adding: "The military is supposed to be defending the country from external enemies.

"We don't have any news at all suggesting that Zimbabwe has been attacked by external enemies. If there is a criminal operation, it is supposed to be (handled) by the police.

"Now, we should watch if there are divisions in the military, and if and when, Mugabe will make a statement and what he will say."

At 93-years-old, Mugabe is Africa's oldest leader, and has ruled Zimbabwe since 1980.