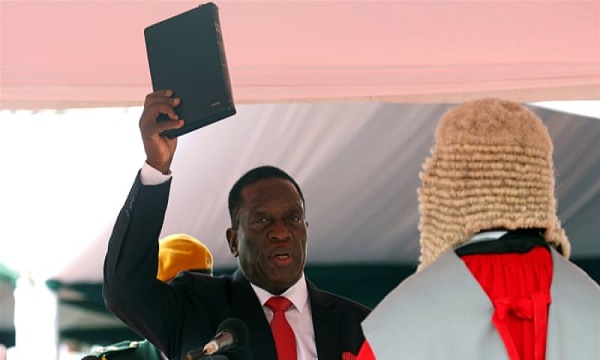 Harare, November 24, 2017 (GSN) - New President Emmerson Mnangagwa laid out a grand vision on Friday to revitalize Zimbabwe’s ravaged economy and vowed to rule on behalf of all the country’s citizens.

Sworn in days after the overthrow of Robert Mugabe, the 75-year-old former security chief promised to guarantee the rights of foreign investors and to re-engage with the West, and said elections would go ahead next year as scheduled.

In a 30-minute speech to tens of thousands of supporters in Harare’s national stadium, Mnangagwa extended an olive branch to opponents, apparently aiming to bridge the ethnic and political divides exploited by his predecessor during his 37 years in charge.

“I intend, nay, am required, to serve our country as the president of all citizens, regardless of colour, creed, religion, tribe or political affiliation,” he said, in a speech that also hailed the voice of the people as the “voice of god”.

Behind the rhetoric, some Zimbabweans wonder whether a man who loyally served Mugabe for decades can bring change to a ruling establishment accused of systematic human rights abuses and disastrous economic policies.

He made clear that the land reforms that sparked the violent seizure of thousands of white-owned farms from 2000 would not be reversed, but promised that those who lost property would receive compensation.

To some political opponents, the speech was a welcome contrast with the habitual belligerence of Mugabe and appeared to be drawing on Mnangagwa’s knowledge and understanding of China as a model for running an economy.

“His model has been the Chinese,” said David Coltart, a former education minister and MP from the opposition Movement for Democratic Change.

“He will drive to make Zimbabwe a more attractive investment location, and more efficient, but like China will not tolerate dissent. If you ‘behave’, you will be secure.”

Those skeptical about the new president’s commitment to change question his role in the so-called Gukurahundi massacres in Matabeleland in 1983, when an estimated 20,000 people were killed in a crackdown on Mugabe’s opponents by the North Korean-trained Fifth Brigade.

Mnangagwa was in charge of internal security at the time, but has denied any part in the atrocities.

Many Zimbabweans, especially the ethnic Ndebele who bore the brunt of the Gukurahundi slaughter, will see his appeal on Friday to “let bygones be bygones” as an attempt to gloss over his nation’s darkest chapter.

Some critics have alleged harsh treatment by soldiers of opponents of the military intervention last week - a de facto coup against Mugabe, 93, and his 52-year-old wife Grace.

Axed finance minister Ignatius Chombo was in hospital with injuries sustained from beatings during a week in military custody, his lawyer told Reuters. He was blindfolded throughout his time in detention, Lovemore Madhuku said.

“It was a very brutal and draconian way of dealing with opponents,” he added.

Asked to comment, police spokeswoman Charity Charamba said she had no information about Chombo.

Separately, High Court Judge President George Chiweshe ruled that the military intervention last week was legal, following an application brought by two citizens who petitioned the court to confirm the military had been right to do what they did.

Since his return to Zimbabwe this month after fleeing a Mugabe-led purge, Mnangagwa has been preaching democracy, tolerance and respect for the rule of law.

Along with Mugabe, Grace - Mnangagwa’s sworn enemy - has been granted immunity from prosecution and had her safety guaranteed, part of a deal that led to Mugabe’s resignation on Tuesday, sources close to the negotiations said.

For decades Mnangagwa was a faithful aide to Mugabe, who was widely accused of repression of dissent and election-rigging and under whose rule one of Africa’s once most prosperous economies was wrecked by hyperinflation and mass emigration.

Mnangagwa earned the nickname “Ngwena”, Shona for crocodile, an animal famed and feared in Zimbabwean lore for stealth and ruthlessness.

In his speech, Mnangagwa called for the removal of Western sanctions and said he wanted to “hit the ground running”.

He appeared to have initial support from neighboring states. South African President Jacob Zuma said he hoped he would steer Zimbabwe successfully through the transition from Mugabe’s rule.

The Southern African Development Community, an intergovernmental organization, said it was ready to work closely with Mnangagwa’s government.

Zimbabweans listening to his speech said they were prepared to give him the benefit of the doubt, but were also realistic about the chances of injecting life into an economy with 90 percent unemployment and banks devoid of cash.

In the last 15 years, an estimated 3 million have emigrated to neighboring South Africa in search of a better life.

“I wanted to see for myself that Mugabe has really gone. He is the only president I’ve known,” said 33-year-old Lenin Tongoona.

“We have a new president who may try something a little different to improve the economy. I’m excited today but tomorrow is uncertain because we don’t know how he will turn out. He talks about creating jobs. How does he plan to do that?” Source: (Reuters)