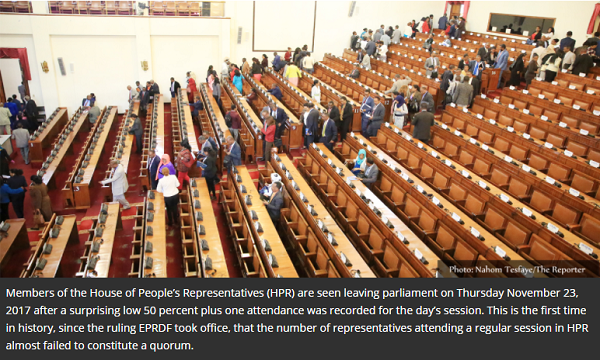 On Thursday the House barely met the required quorum of 50 percent plus one or the 275 thresholds in the 547-member Ethiopian parliament.

Since early October, after President Mulatu Teshome (Ph.D.) inaugurated the joint session of the two Houses, one too many regular sessions have been skipped in the lower House, although the various Standing Committees have been meeting regularly.

In fact, the level of attendance has shown a marked decline since parliament commenced this year. Even when Prime Minister Hailemariam Dessalegn defended the motion presented on the President’s speech, light attendance was observed.

According to Article 58 (1) of the Constitution, the regular sessions should be conducted provided that more than half of the member representatives are in attendance thereby constituting a 50 percent plus one quorum requirement.

However, thus far, there was no incident where the House had failed to fulfill the required quorum. Even this year, in spite of the clear decline in attendance of regular House sessions, there has not been any time where the lawmaking body has struggled to meet the threshold (quorum).

But, Thursday’s session was unprecedented in the sense that it was held with the lowest attendance ever recorded in recent history. In fact, the meeting barely escaped the minimum quorum level.

The meeting was called to deliberate on two agendas – one was a question and answer session with the minister of Trade, Bekele Buladu (Ph.D.), and the second one was to deliberate on a draft proclamation (concerning nationwide integrated master plans) which was eventually referred to the House of Federation (HoF).

The draft legislation was presented to the House last month originally before it was referred to the Urban Development and Construction Affairs Standing Committee for review. However, upon reviewing the draft law for more than three weeks, the standing committee has brought it back to the House this week for consideration and if possible voting.

But, this was not to be. In fact, the House decided to re-refer this piece of legislation to the HoF for the reason that two of its articles could be potentially contradictory to the Constitution. Hagere Minale, a member of the responsible Standing Committee, told the House that two of the proposed provisions would, in fact, need Constitutional interpretation.

On Thursday, the Standing Committee’s report and the resolution of the House did not attract the usual debates or questions from the MPs as most of the notable figures in the House were absent. Hence, the House voted for the bill to make its way to the upper House for further constitutional interpretation.

Soon after the conclusion of the day’s session, The Reporter tried to solicit the reaction of Deputy House Speaker, Shitaye Minale, regarding the gradual decline of the number of MPs in the House. However, Shitaye refrained from offering details and said; “most of the members are away from Addis Ababa on field supervision work while some of them are engaged in separate meetings that day”. But, she did not offer further details.

Shitaye took over the gavel from Abadula Gemeda – still formally House Speaker but announced his resignation days before the opening of this year’s parliamentary term – and has presided over all except two of the regular meetings so far this year.

Thus far, no official statement was issued from the government regarding the absence of MPs from parliament in recent days.

In terms of presentation, constituencies in Oromia region have the highest number of seats accounting as many as 178 while Amhara comes in second with some 134 seats. Whereas, other constituencies such as those from the South, Tigray and Addis Ababa have served seats of 108, 37, and 23 seats, respectively. The remaining 20 seat are designated for other parties which are currently occupied by affiliated parties of the ruling coalition, the Ethiopian Peoples’ Revolutionary Democratic Front (EPRDF), who have won constituencies in regions namely Somali, Afar, Gambella and Benishangul Gumuz.

In fact, in most cases, the regular House sessions are not necessarily attended by 100 percent of its members. In some special cases, a senior government official who are responsible for key government offices are allowed to miss regular sessions in relation to the weight of their mandates. But in most cases, their absence does not seem to affect overall attendances of the House.

In the current parliamentary term, over 20 MPs sit on the cabinet of Prime Minister Hailemariam holding ministerial positions while over 30 of them are in state ministerial capacity. Yet again, there are a considerable number of people serving in diplomatic missions residing abroad and are not be expected to attend most of the regular sessions.

Considering the past six regular sessions, most of the meetings are observed to be attended by less than 300 members sparking question as to why over 200 MPs are consistently absent from their lawmaking duties. (Source: Reporter )