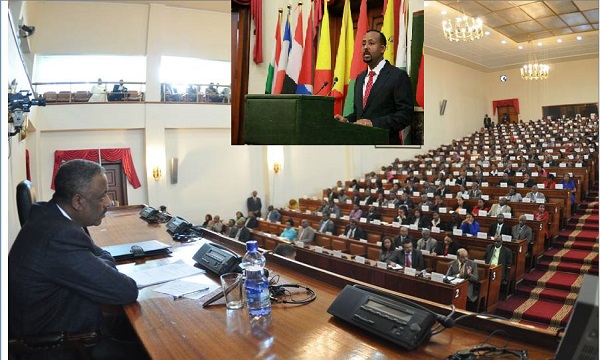 Addis Ababa, April 19, 2018 (GSN) - Ethiopia’s new prime minister, Abiy Ahmed will on Thursday present his new ministerial cabinet, in his first appearance in parliament since he was sworn in. The parliament whose members are all from the ruling EPRDF coalition will approve the ministers and also replace the current speaker of the house, Abadula Gemeda.

Gemeda resigned his position last year in October, before rescinding that resignation on December 29, 2017. The house is also expected to approve the draft bill prepared to reform the structure, power, and duties of executive bodies. Ahead of the imminent cabinet reshuffle, Oromia regional government made some changes to its structure, appointing two federal ministers to positions in the regional government.The minister of Public Enterprise, Girma Amente and the minister of Government Communications Affairs Office were appointed to head the Oromia Urban Development & Housing Bureau and Oromia Communications Affairs Office respectively.Replacements for these ministerial slots will presumably be announced by Abiy on Thursday.

Gemeda, a former president of Oromia state might also be poised to take on a bigger role within Abiy’s government. Analysts are keenly watching the cabinet announcement, which they say will determine the implementation of Abiy’s reform agenda.

Abiy is working to establish democratic reforms that can quell protests that have rocked the Eastern African nation since 2015. Since he took office on April 2, Abiy has toured several regional states asking protesters to be patient with him as he institutes reforms in the government that has been accused of gross human rights abuses in the past. He has also met opposition leaders and pledged to ensure a level playing field ahead of elections in 2020. (Reuters)