May 14, 2018 (GSN) - The 22-year-old son of a former South Sudanese military general allegedly paid for a $1.5million mansion using five unexplained installments from African companies to a luxury car business in his name.

Nguoth Oth Mai in June 2014 purchased the seven-figure home in Narre Warren, in Melbourne's south-east, despite being on welfare, living in a housing commission, and having a father with a salary of $57,000.

The mansion is now being targeted by police, who hope to seize the home following civil action launched under the Proceeds of Crime Act, ABC reported.

Police claim Nguoth Oth Mai - who is the son of the former chief of staff to Sudan's People's Liberation Army, James Hoth Mai - allegedly acquired the home with money transferred from companies in Uganda and Kenya into Australian business accounts, according to court documents seen by the publication.

According to an affidavit filed by the Australian Federal Police (AFP), the National Australia Bank (NAB) business accounts were registered to former luxury car business Sports cars Dealers, which Nguoth Oth Mai was a director and majority stakeholder of.

Police claim the payments came from companies owned by Humphrey Kariuki and Idro Taban, who are both known to corruption investigations team The Sentry, which was founded by George Clooney. 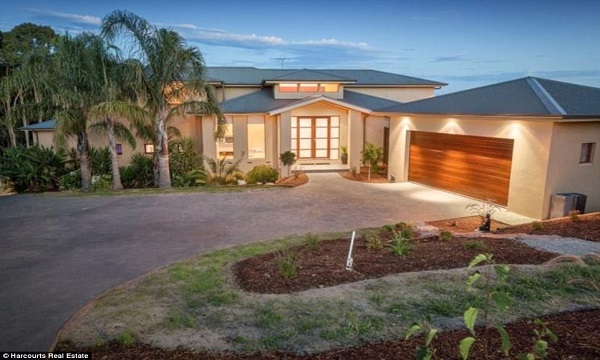 According to the AFP, the payments were then received by Sports cars Dealers, which police claim didn't trade any vehicles until it was deregistered in September 2016.

Money in the NAB accounts was also used to purchase an Audi for Nguoth Oth Mai's younger sister, police allege.

Police claim the luxury car business was established to allow members of the family to continue receiving welfare payments, which would have been canceled if Centrelink was aware of the wealth.

He added that NAB 'should possibly have noticed' the funds being transferred without any 'apparent commercial reason'.

NAB told the publication in a statement that it conducts checks and due diligence on all its customers.

Daily Mail Australia has contacted NAB for comment. The AFP hopes to seize the mansion once the case returns in July.

The estate, officially bought by the general's son in 2014, boasts an infinity pool, sauna, and five-car garage.

According to an affidavit filed by the AFP, it suspects James Hoth Mai, whose salary was around $57,000, helped his son buy the mansion with the proceeds of corruption.

Their Criminal Assets Confiscation Taskforce started a probe in 2016 and in February began proceedings at the High Court.

The Sentry report titled War Crimes Shouldn't Pay: Stopping The Looting And Destruction In South Sudan contains a page on General Hoth among other figures it accuses of corruption.

It says: 'Even as a senior official in the SPLA, his salary was never more than about AUD$58,000 per Year.

'However, Gen. Hoth Mai's retirement home appears to indicate that his tenure in the SPLA was far more lucrative than his salary would suggest.

'Notably, Nguoth Oth Mai - Gen. Hoth Mai's 23-year-old son who purchased the house - was studying in China until mid-December 2013, just six months prior to the transaction.

'The residence is situated on a one-acre lot backing up to a forested area bordering nearby Lysterfield Lake, a popular destination for sailing, canoeing, and mountain biking.

'The home is described by the realty company that sold it as "perfecting the balance between serenity and glamour."

'The home boasts four bedrooms, a top-of-the-line kitchen, a two-tiered home theater, a sauna, and an infinity pool.'

It adds: 'When The Sentry visited the home in August 2016, a BMW 316i used by one of Hoth Mai's daughters was parked in front of the house.'

In court in February, JR Mailey, Investigations Director at The Sentry, explained why the group was suspicious of the purchase, reported the Herald Sun.

He said: 'First, the cost of the home far surpassed what one could reasonably afford on the salary of a general of Hoth Mai's rank.

'Second, the Hoth Mai family had purchased the home shortly after having resided in subsidized housing, a major sudden change in the family's lifestyle.

'Finally, the home was purchased in the name of Hoth Mai's son, who had only recently graduated from college.

'We considered this a possible attempt to obfuscate the General's connection to the purchase. Taken as a whole, the circumstances of the transaction, we found, merit more scrutiny from relevant law enforcement and regulatory authorities.'

An AFP spokeswoman said: 'The investigation, which included assistance from the ACIC, focused on the acquisition of assets in Australia by the family members of an individual who is believed to have held senior positions including chief of staff in the Sudan People's Liberation Army between May 2009 and April 2014.'

The legal proceedings are a civil matter under the Proceeds of Crime Act.

The alleged offenses are a breach of directors' duties, causing a loss to the

Commonwealth and obtaining a gain from the Commonwealth. No criminal charges

have been laid. (The Daily Mail)