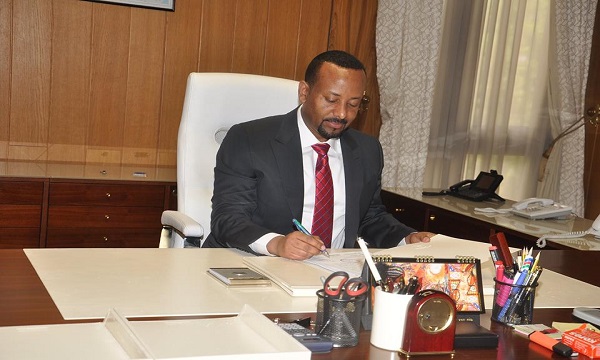 Addis Ababa, June 18 (GSN) - The Ethiopian Parliament is to grill on Monday Prime Minister Abiy Ahmed on a recent border and economic liberalization decisions made by the ruling coalition.

In a press statement, the Ethiopian Parliament said Ahmed in a special parliamentary session will present the explanation about key decisions taken by Ethiopian People Revolutionary Democratic Front (EPRDF) Executive Committee to concede a border town to bitter rival Eritrea and to partially liberalize key sectors of the economy.

The prime minister will answer questions raised by members of parliament.

On June 5, the Executive Committee of the EPRDF said it is committed to an unconditional implementation of Algiers peace agreement with Eritrea.

The peace agreement ended a two-year border war that killed an estimated 70,000 people from both sides, but a tense armed standoff continued, with the two countries engaging in skirmishes occasionally.

Ethiopia until this month had declined to endorse the results of the peace agreement fully, including the symbolically important town of Badme which Ethiopia currently controls but which was awarded to Eritrea.

Eritrea for its part has insisted the border demarcation has to be done first before any talks on normalizing ties.

Also, on June 5, the Executive Committee of the EPRDF said a decision has been made to expand mixed ownership or outright full privatization of state-owned enterprises such as railway projects, sugar development, industrial parks, hotels and other manufacturing industries.

The statement further said the move to partially liberalize key sectors is intended to increase the constructive role of Ethiopia's large Diaspora population and foreign investors.

Ethiopia until now has resisted liberalizing key sectors to foreign and local investors, saying it needs to protect its economy from multinational firms and ensure domestic ownership of the economy is kept intact. (Xinhua)