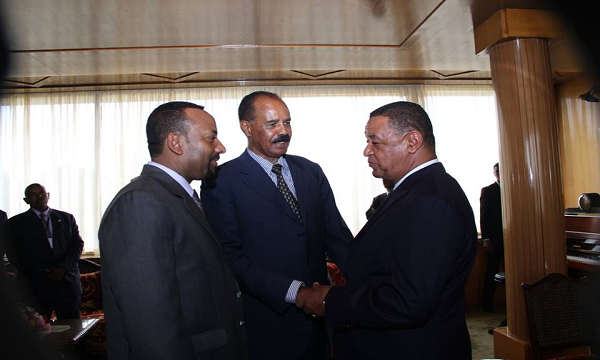 Addis Ababa, July 15, 2018 (GMN) - When Daniel Gayem’s father in Ethiopia wanted to talk to his brother in neighboring Eritrea, they would set up a conference call through Daniel who lived in Las Vegas.

The two brothers were born in Eritrea when it was a province of Ethiopia and had long ago moved to the capital Addis Ababa, but when the two countries fell out in 1998, the brother and the rest of their family were deported, along with 70,000 others of Eritrean origin.

Daniel’s father, who was married to an Ethiopian, was allowed to stay in Addis Ababa.

All communication and transportation links were cut between the two countries, and families were cleaved in half. Contact was limited to occasional rushed third-party phone calls or arduous trips through neighboring countries. Daniel’s father has yet to visit the grave of his mother, Daniel’s grandmother, who died five years ago in Eritrea.

With a startling suddenness, however, this long separation has come to end after the signing of a peace agreement on July 09, 2018 between Ethiopia’s reformist prime minister, Abiy Ahmed, and Eritrea’s longtime president, Isaias Afwerki.

The five-point declaration ended the state of war and promised to restore trade, transport and telecommunication links and reopen embassies.

Soon afterward, Ethiopian Airlines announced that flights to Eritrea’s capital, Asmara, would resume on July 18. Ethiopians and Eritreans could obtain visas on arrival, in stark contrast with what before had been a very difficult process.

On July 14, 2018, Isaias will arrive in Ethi­o­pia for an unprecedented three-day visit.

Some Ethiopians were so excited to reach out to their long-estranged neighbors that they just started dialing numbers. “Oh Gosh, I am so excited over this EthioEritrea thingy, I just called on a random number in Asmara and had a nice chat with a lady named Frtuna,” said one of the many users of social media taking advantage of the new service.

The stunning turnabout a rare bit of conflict-free good news for the African continent came about through long-standing efforts by regional countries and the exit of Isaias’s longtime rivals in Ethiopia.

Eritrea’s information minister, Yemane Gebremeskel, described the changes as “driving on the fast lane for peace and cooperation” as he tweeted a picture of a butterfly in the colors of the nations’ flags.

But as Kjetil Tronvoll, an expert on the conflict from Oslo’s Bjorknes University College, warns, much of what has been agreed to has been “low hanging,” and thorny issues remain.

“This has been done in a remarkably quick manner, which indicates growing mutual trust between the two government leaders,” Tronvoll said. “But the difficult issues, which were the triggering factors to the war, lie ahead trade and tariff regimes, as well as currency conversion.”

The change in rhetoric has been dramatic, with both countries’ media celebrating the rapprochement; just a few months ago, they were demonizing each other.

“It seems like it’s a dream,” said Amleset Araya, who was born near Asmara but grew up in Addis Ababa until the war broke out in 1998. “You never hear anything positive. You think one day God will do something. But this fast? The changes came so fast, it is amazing. Many people are happy. It is like a dream.”

She still remembers how people were forced out of homes they had grown up in. “There was no time to pack to get ready,” she recalled. “Sometimes just one member of the family was forced to leave. The rest stayed. The dad or mom had to go alone, or the children stayed with one parent.” Eventually she moved to Canada.

Her son, Zecharias Zelalem, a journalist and blogger who writes from Canada, described how only a few months ago, something as simple as a wedding for a family divided between two warring countries was a major logistical undertaking.

“For her parents to show up at the wedding, they had to leave Eritrea by way of Sudan, on a bus, and from Sudan, another bus to Ethiopia, which takes two to three days,” he said.

Now Ethiopian Airlines says the flight will take just over an hour.

Daniel, 36, who now lives in Addis Ababa, mused at how much more accessible whole branches of the family are. “I don’t even know what they look like,” he said. He could call them now if only he knew how.

“We haven’t talked to that side of the family for so long, we don’t even know their phone numbers,” he said. “That’s how bad it is.”

Of course, there are many Eritreans living in Ethiopia who are uniquely affected by these developments the refugees.

There are more than 160,000 Eritreans registered as refugees with the United Nations who are living in Ethiopia, often after fleeing compulsory military service. Thousands more come every month.

Many try to find their way to Europe, while others live in Addis Ababa, where they hope the peace will also bring changes to the government, which has been criticized by international rights groups.

“They are happy [about the peace], but they don’t want to go back there,” said Daniel, who has many friends in Addis Ababa who recently left Eritrea. “They would love to go back to see their family if they won’t be captured if they have the freedom to leave the country again.”

An estimated 70,000 people died during the two-year war. After the conflict, Eritrea remained on a war footing to confront its massive neighbor, which has 20 times the population.

The demobilization of this army and the final demarcation of the border will be part of the delicate negotiations to finalize the peace deal.

But Tronvoll, who has been studying Eritrea since the 1980s, said that such change could threaten Isaias’s grip on power, which dates to 1991.

“It seems unlikely that his regime will last long if he liberalizes, demobilizes the army and accepts the return of hundreds of thousands of refugees,” he said.

Instead, he said, Isaias might look for incremental changes. But those small measures will still mean a huge amount for countless families.

“With the way things are going now, I will soon go see the rest of my family I’m really looking forward to it,” Daniel said. “And I can see my grandmother’s grave, uncle’s grave. I haven’t seen my grandmother since I was a kid.” (Overnight foreign editor)