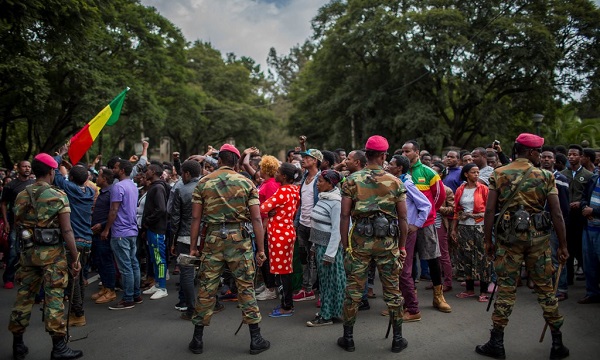 Addis Ababa, September 26, 2018 (GSN) - The Ethiopian government has arrested thousands of people around the capital, Addis Ababa, over the last week and sent many of them to military camps for “rehabilitation,” the authorities said on Monday, as the government sought to respond to mounting criticism from Ethiopians who say it has done little as ethnic violence has flared.

Ethiopia, to a degree unusual in Africa, has long exercised a degree of surveillance and control over its citizens. But earlier this year it embarked on a whirlwind series of reforms, mainly guided by the country’s new prime minister, Abiy Ahmed, 42, a former army officer.

Ethiopia has sought peace with its longtime adversary, Eritrea; it has freed prisoners; opened access to websites and television channels that it had blocked for political reasons, and it invited banned political organizations and their leaders to return from exile.

This has brought more breathing room for Ethiopians and represents a dramatic change in direction for Africa’s second most populous nation one that until recently had seemed to take China for its model. But amid these changes, there have been growing episodes of ethnic violence around the country, and in the middle of this month, that violence reached Addis Ababa and the surrounding area.

Some argue that the easing of state political controls and the ethnic violence are connected. One possible link is that Mr. Abiy, by urging banned political organizations to return home, may have energized these groups and amplified their reach. Some of these formerly banned organizations are ethnic in nature, like the Oromo Liberation Front, a separatist group that returned to the capital from exile earlier this month and that says it represents the Oromo people, the most populous of Ethiopia’s more than 80 ethnic groups.

“The arrival of these new entities complicated the political discourse and really has suffocated the political space not always in a good way,” said Yoseph Badwaza, a senior program officer at Freedom House who testified about developments in Ethiopia to a congressional subcommittee this month.

“The government created all sorts of privileges for these people, granting security and media access and organizing this elaborate welcome ceremony, which gave them a boost,” he said in a telephone interview on Monday, referring to some of the various exile groups that have returned.

“I think there was no real anticipation that the addition of these new political voices would kind of dwarf the government’s voice or progress on the reform effort,” Mr. Badwaza added.

The latest large-scale outburst of ethnic violence coincided with the return 1,500 fighters from the Oromo Liberation Front, which had long been in exile in Eritrea. The first sign of tension appeared in Addis Ababa, as Oromo youth from their nearby heartland of Oromia flocked to the capital to welcome the returning separatists. Scuffles broke out when the young people started to paint the streets and walls of the capital with the green and red colors of the group’s flag.

Deadly violence spread to the Oromia region, particularly in the ethnically diverse town of Burayu, as well as the town of Ashewa Meda, leaving more than 20 people dead, according to local news outlets. Many of those killed were said to belong to minority groups in the Oromia region.

In the following days, about 35 people were killed in Addis Ababa and the region around the city, the authorities said. Some were killed by the police during protest demonstrations against the ethnic violence and what the protesters regarded as government inaction.

In an interview, Alemayehu Belete, 28, echoed a common complaint when he expressed dismay that the government had failed to prevent or stem ethnic violence. “It makes me question where the government stands on protecting its citizens,” he said.

The government’s widespread arrests over the last week may be aimed at changing that perception. So far, though, there is little indication that many of those arrested had much connection to the ethnic violence. In fact, many appear to have been arrested for petty offenses during sweeps over the last week of bars and clubs and other gathering spots across Addis Ababa.

On Monday, the city’s police commissioner, Degefe Bede, provided a tally, saying that about 1,200 people who are believed to have been involved in the unrest remained in custody. They had been taken to a military camp for “rehabilitation” as citizens and “taught how to be peacefully integrated with the community,” he said.

Nearly 175 other people will face charges related to the unrest, he said, and more than 1,000 other people have been arrested for a variety of petty offenses.

Amnesty International said in a statement that many of those arrested had been taking part in protests about the ethnic violence, adding that they “must all be released immediately and unconditionally.” (Reuters)