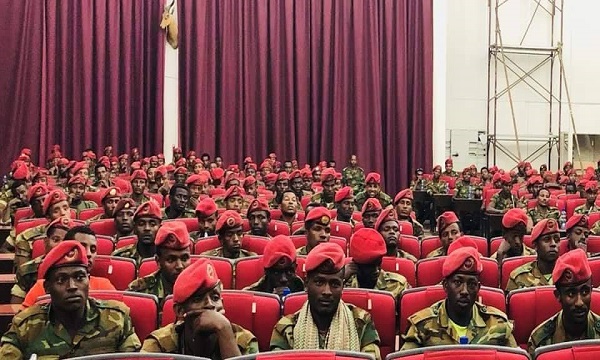 Hundreds of the soldiers with their arms marched on the presidential palace demanding to see the Prime Minister. They were only allowed in after agreeing to be disarmed.

According to his chief of staff, Fitsum Aregaa, “PM Abiy Ahmed listened to the grievances carefully, reprimanded them for the wrong procedure they followed to express those grievances, but concluded the meeting with a promise to meet properly in the near future to positively consider their demands.

“They apologized to the people and government of Ethiopia in a discussion held today with Motuma Mekassa, Minister of Ethiopian Defense Force, and General Seare Mekonnen, Chief of Staff of the Defense Force,” the report said.

It quoted Motuma as stressing that an investigation will be conducted to identify superiors whose failure to act led to the grievances that the soldiers took improperly to the PM.

After meeting with the soldiers on Wednesday part of the reprimand Abiy had for the officers was to do push-ups which he personally joined in. The action was largely praised by on social media.