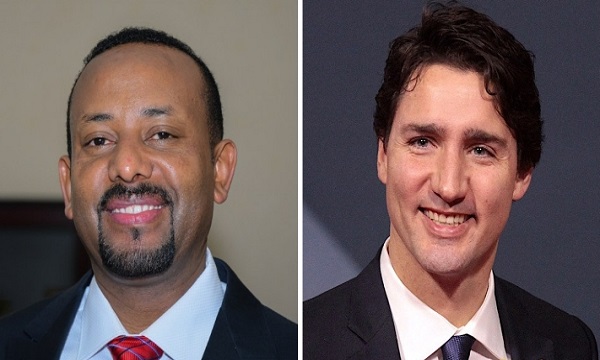 Prime Minister Trudeau offered his congratulations on the ambitious program of reform Prime Minister Abiy has pursued, including his leadership on gender equality with the appointment of a gender-balanced Cabinet and of Ethiopia’s first female President and first president of the Supreme Court. Trudeau said his government is committed to supporting the ongoing reforms.

The Prime Ministers discussed regional peace-and-security issues, including the historic accord achieved between Ethiopia and Eritrea.

Canada and Ethiopia enjoy cordial bilateral relations, cemented by development aid ($192.92 million in 2016-2017), trade worth $119m in 2017, and thousands of Ethiopians living in Canada.

Having appointed a gender-parity cabinet last month, Abiy has since led the country to celebrate its first female president and first female head of the Supreme Court.

The top female appointees, including the minister of peace, Muferiat Kamilhave since embarked on a nationwide peace campaign, which was launched on Monday.

The two leaders agreed to meet soon in person.