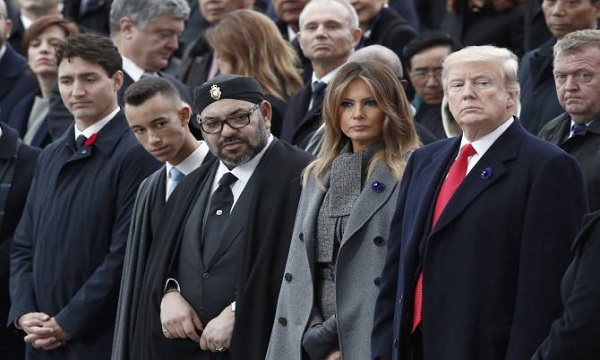 At a weekend commemoration of the 100th anniversary of the end of World War I, the president who proudly declares himself a “nationalist” stood apart, even on a continent where his brand of populism is on the rise.

He began his visit with a tweet slamming the French president’s call for a European defense force, arrived at events alone and spent much of his trip out of sight in the American ambassadors’ residence in central Paris.

On Sunday, he listened as he was lectured on the dangers of nationalist isolation, and then he headed home just as the inaugural Paris Peace Summit was getting underway.

The visit made clear that nearly two years after taking office, Trump has dramatically upended decades of American foreign policy posture, shaking allies. That includes French President Emmanuel Macron, who on Sunday warned that the “ancient demons” that caused World War I and millions of deaths were once again making headway.

Macron, who has been urging a re-embrace of multinational organizations and co-operation that have been shunned by Trump, delivered a barely veiled rebuke of Trumpism at the weekend’s centerpiece event: A gathering of dozens of leaders at the Tomb of the Unknown Soldier at the base of the Arc de Triomphe to mark the passage of a century since the guns fell silent in a global war that killed millions.

Bells tolled across Europe’s Western Front and fighter jets passed overhead to mark the exact moment the devastating war came to a close.

With Trump and other leaders looking on, Macron took on the rising tide of populism in the United States and Europe and urged leaders not to turn their backs by turning inward.

“Patriotism is the exact opposite of nationalism: Nationalism is a betrayal of patriotism,” Macron said, adding that, when nations put their interests first and decide “who cares about the others” they “erase the most precious thing a nation can have … its moral values.” (AP)