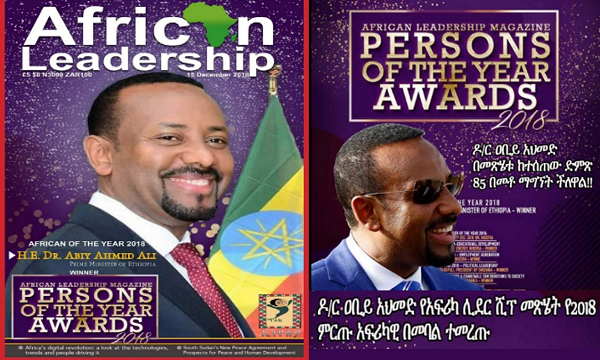 December 16, 2018 (GSN) - Ethiopian Prime Minister Dr. Abiy Ahmed has been named African of the Year 2018 by The African Leadership Magazine.

PM Dr. Abiy Ahmed resoundingly emerged as the African of the Year 2018 with over 85% of total 1 million votes/submissions.

Current Deputy Secretary-General of the United Nations (UN) and a former Minister of Environment of Nigeria, Amina J Mohammed, was named African Female Leader of the Year 2018.

The winners were unveiled by the Publisher of the Magazine, Mr. Ken Giami, at the UK Head Office of the group.

Winners shall be decorated and presented with the instruments of honor on the 22nd February 2019 in Johannesburg, South Africa, it was noted.

The African Leadership Magazine Persons of the Year is an annual award reserved for distinguished Africans, who are considered to have blazed the trail in the year under review.

It is published by African Leadership (UK) Limited, a company registered in the United Kingdom.

The magazine focuses on bringing the best of Africa to a global audience, telling the African story from an African perspective; while evolving solutions to peculiar challenges being faced by the continent today.