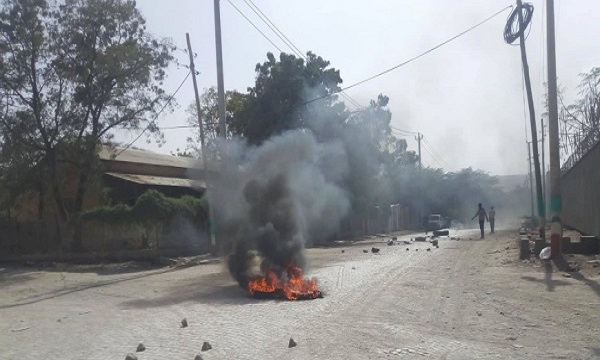 January 26, 2019 (GSN) - The Ethiopian Defense Force seems to be increasingly dragged into law enforcement business rather than issues of National Defense.

As the security situation in Dire Dawa, Ethiopia’s chartered city in the South East of the country worsens, the Eastern Command Post of the Ethiopian Defense Force issued a warning calling for an end to violence in the city or else those who are involved in it will face what the eastern command post thinks is an “appropriate” measure.

Protest and violence in the city have been going on for about five days now. And so far one child is confirmed dead and 10 others have sustained non-life threatening wounds. The Defense Force tends to see the development in the city as a threat to order in the country.

Renewed violence started to unfold in the city on January 19, 2019, when a group of youth throws rocks to attack followers of Ethiopian Orthodox Church who were returning from procession ceremony of Ark of the Covenant at Egziabherab church during the occasion of Timkat (Epiphany).

Then organized youth groups took to the street the following day to stage a demonstration against the city on grounds of “bad governance in the city administration and fuel shortage, as reported by DW Amharic.

Roads within the city and those linking the city to another city have been closed with big rocks thereby hindering mobility and business activity. For example, a road linking Dire Dawa and Addis Ababa has been closed.

The administration does not seem to link the violence to bad governance. For Dire Dawa authorities, for example, Mayor of the city  Ibrahim Usman, those youth groups involved in the violence are linked to former Ethio-Somali administration (Heego) and those groups who do not want recognition for the city.

Despite the claims from the city administration regarding the identity of those who are involved in the violence, protesters who took to the street have also demanded an end to what is referred to as “40:40:20” administrative arrangement in the city which is based on the ruling coalition’s ethnic politics and constitution, according to DW Amharic report. As per the arrangement, 40 percent of the city administration is ethnic Oromo, 40 percent is ethnic Somali and the rest 20 percent is for the rest of ethnic groups in Ethiopia- and Ethiopia has more than eighty ethnic groups.

Whatever the case is, the Defense Force posted in the region (Eastern Command Post) wants youth group in the city to end the violence and discuss their grievance with the city administration. The response for not ending the violence and protest will be “an appropriate action” from the defense force, to enforce rule of law and protect the safety and security of residents in the city.

Ethiopia’s Defense Force had some success in terms of restoring order and law in some parts of the country, for example in Wollega, the western part of Ethiopia, where there had been an operation to disarm militant Oromo ethno-nationalist elements whose leaders reportedly reconciled yesterday with leaders of the party that is governing the region.

What many Ethiopians seem to question, however, is whether relying on the Defense Force for law enforcement works is sustainable and right.