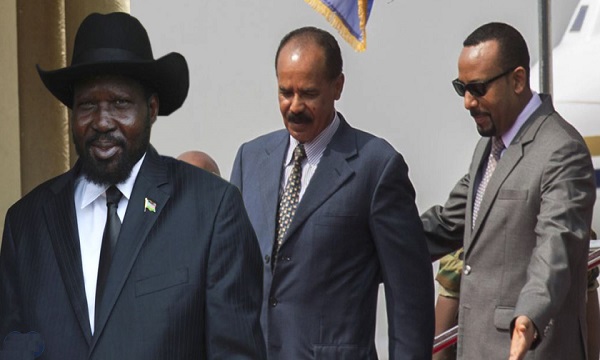 March 03, 2019 (GSN) - The president of Eritrea and the prime minister of Ethiopia are expected to arrive in the capital Juba on Monday morning, officials said.

The official agenda of the meeting in Juba is to bolster already strong relations between South Sudan, Ethiopia, and Eritrea.

Makuei, who is also the government's spokesperson, called on Juba residents to turn out in large numbers to give a warm welcome to the two regional leaders.

“Citizens are expected to assemble on the road that comes from the airport up to the Mudiria roundabout and from the roundabout up to J1 at 8:30 am,” he said.

The minister noted that the leaders will hold a tripartite meeting at the State House at 10:20 am.

He added that the three leaders will issue a joint press statement after a series of meetings at the State House. “After the end of the press statement at 12:05, the meeting will end and our guests will depart at 1:30,” he said.

South Sudanese leader Salva Kiir, who has been on a Bahr al Ghazal tour since 26 February, has cut short the tour to meet the visiting leaders in Juba. (RT)