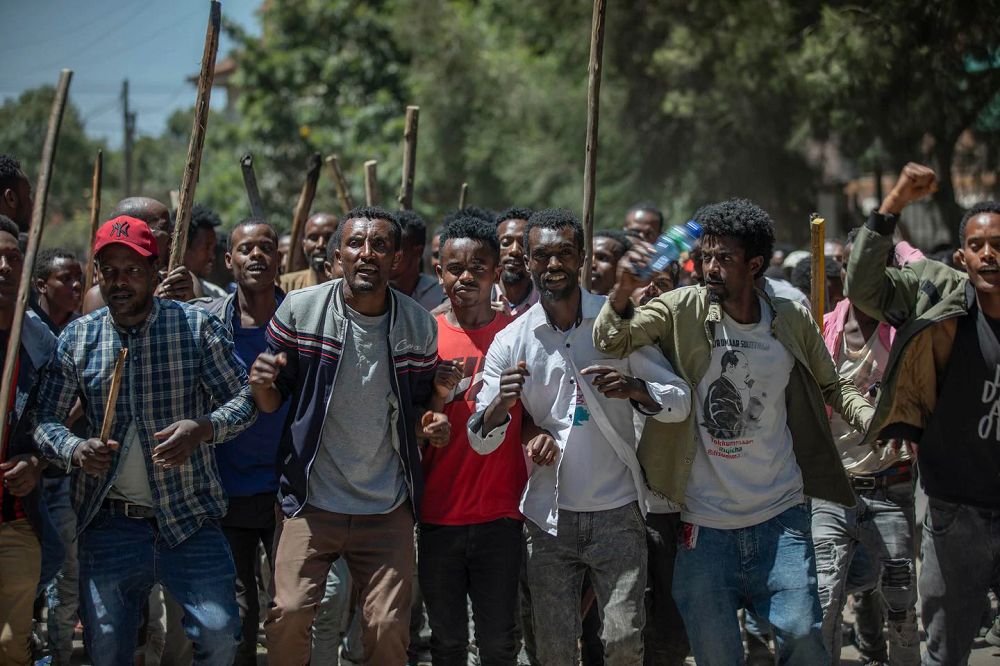 October 25, 2019 (GSN) - Ethiopia’s Nobel Peace Prize-winning Prime Minister Abiy Ahmed faced the most serious political challenge of his short rule as officials said dozens of people might be dead in two days of unrest caused by tensions between security forces and the country’s most prominent activist.

In an interview with The Associated Press, Jawar Mohammed hinted he might raise the stakes by entering next year’s election, but he warned that holding the vote amid current conditions “is the most dangerous thing Ethiopia can do.”

Not two weeks have passed since Abiy was named the Nobel winner for his sweeping reforms that included welcoming home from exile Mohammed and other critics and opposition figures who had been considered terrorists by the previous government. Abiy called it opening up the political space after he took office last year, and Ethiopians were surprised but jubilant.

Now Ethiopia’s largest regional state is engulfed in protests sparked by apparent friction between security forces and Jawar, a media entrepreneur who many say played a key role from afar in mobilizing months of widespread protests that led the previous prime minister to resign.

Some Ethiopians fear protests could emerge again as long-held grievances are aired after the loosening of repressive controls in a country with scores of ethnic groups. Officials recently expressed disgust with some media outlets that they called unprofessional and too ethnic-centered.

Last year, Abiy welcomed Jawar home, however, in remarks to parliament Abiy warned unnamed people “who don’t even have an Ethiopian passport” that “if you threaten our peace and security, we will take measures.”

Many Ethiopians saw it as a warning to Jawar, a U.S. passport holder, who said he woke up the next morning to find attempts being made to remove his government-provided security detail in the capital, Addis Ababa.

“The order to remove my security was a strange one. It was attempted in the middle of the night,” Jawar said. “Later on I found out the plot was to remove the security and then unleash a mob attack on my house and accuse some other rival groups.”

He alerted the public on social media, and hundreds of his supporters began to arrive. Some camped outside and chanted slogans against the prime minister: “Down, down, Abiy!” Some remained while Jawar appealed for calm.

The unrest ignited in cities across the Oromia region that is home to many of Jawar’s supporters.

But the real death toll could be in the “dozens,” a local official in the regional capital, Adama, told the AP speaking on condition of anonymity because he was not authorized to talk to the media. Several Oromia residents told the AP that non-Oromos had been attacked, with their properties looted and burned.

Jawar said he was surprised by Abiy’s remarks.

“We have a very cordial relationship but we have differences, too, so I do criticize him,” Jawar said, adding he is willing to sit down and talk with the prime minister. “It was him who convinced me to have government security, saying my security was not an individual one but national security. Now I don’t know what happened.”

The head of the federal police, Endeshaw Tassew, said no measure was taken by the government or police forces against Jawar. “His message was wrong,” he said, but he confirmed the government was removing security details for some people due to what he called the improving security situation in the country.

Jawar would not say whether he would relinquish his U.S. passport and become an Ethiopian national again, freeing him up to run in the May election.

“Now I can’t remain much on the sideline. I want to add voices to the political discussion,” he said. “I’m still looking for a way ... maybe assisting the opposition or bridging the gap between the opposition and the ruling party. I haven’t made up my mind.”

Jawar is a polarizing figure. While many in Oromia consider him a hero who pushed hard for change in Ethiopia, others call him an opportunist who is waiting for the right time to assume power.

“I think he is a threat to the national security of Ethiopia,” said an opposition figure, Yilikal Getnet. “He is not acting responsibly and is trying to make the political sphere a one-man show. Simply put, he’s an opportunist.”

Jawar warned that Abiy’s dramatic reforms could slip back, echoing some other critics who fear the prime minister could return to the previous government’s repressive measures.

“Yes, change has come. But that change has not been consolidated. The political sphere has opened up but I think it is closing now,” Jawar said. “I think what our leaders need to be very careful of is there’s no condition for a return to dictatorship. If anybody tries to do that, it will be inviting catastrophic communal violence across the country.”

Ethiopia’s prime minister should be careful with his tendency of centralizing the country’s politics and be aware that he can’t change things overnight, Jawar added, and he warned against insisting on holding the vote on time.

“I know the prime minister and some opposition groups want to do it,” he said. “Sure, they might win. (But) you can win an election and lose the country, too.” (By ELIAS MESERET/AP)