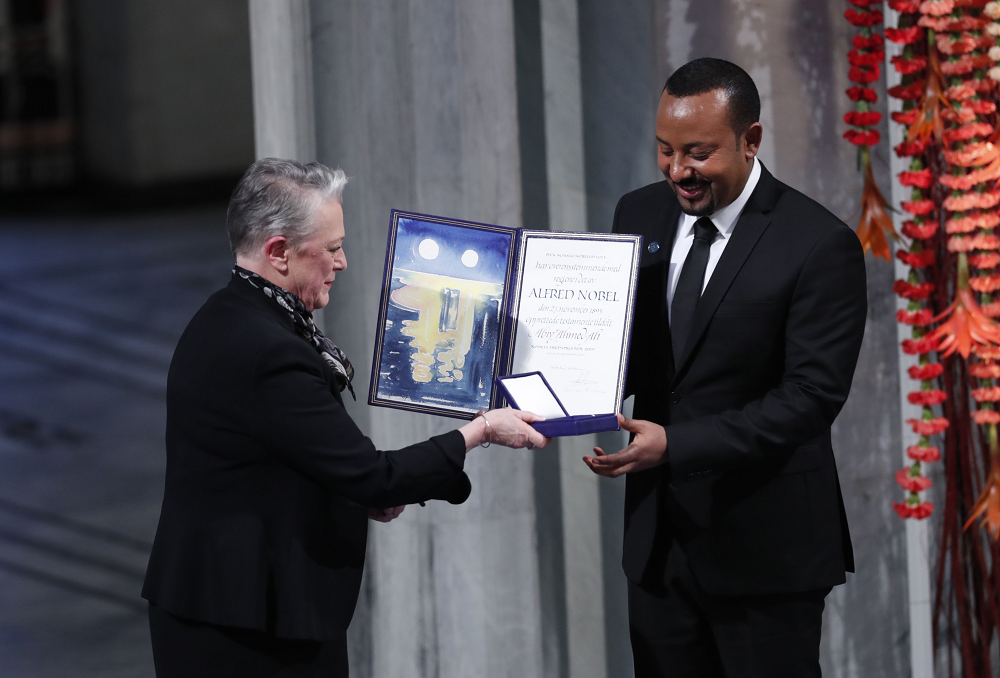 "I accept this award on behalf of Ethiopians and Eritreans, especially those who made the ultimate sacrifice," Ahmed said during his, at times emotional, lecture.

He retraced his past from "young soldier when the war broke out" to his current position as the country's leader, affirming "I have been there and back. I have seen brothers slaughtering brothers on the battlefield."

He praised Eritrean President Isaias Afwerki  who has been in power since 1993 for his role in securing peace.

"We understood our nations are not enemies and that instead, we were the victims of a common enemy called poverty," he went on, adding: "our commitment to peace between our two countries is ironclad".

Ahmed, who only assumed power in April 2018, also called on the global community to "invest in peace", stressing that "there is a big price for enduring peace" and that while "it takes a few to make war, it takes a village and a nation to nurture peace".

Since his election last year, Ahmed, 43, resumed talks with Eritrea, negotiated a peace agreement and agreed on the borders set by an international commission in 2002, as well as playing a key role in other processes in the region, according to the Nobel Committee's ruling.

The ceremony presided over by the Norwegian royal family, will begin at 13:00 local time (12:00 GMT), and will be preceded by a children's event organized by the NGO Save the Children at the Nobel Peace Centre, which Ahmed will not attend.

The Ethiopian government did not give a press conference yesterday at the Nobel Institute, a decision that has been criticized in Norway.

The director of the Nobel Institute Olav Njølstad has described the situation as "very problematic", and has speculated that it may be due to the difficult situation in Ethiopia as ethnic tensions have increased during the past months.

After the handover ceremony, Ahmed will later take part in the torchlight procession through the center of Oslo, and attend the banquet with Norwegian kings and other authorities.

Ahmed succeeds Congolese physician Denis Mukwege and Iraqi Yazidi Nadia Murad as Peace Prize winner. They were honored in 2018 for their struggle to end the use of sexual violence "as a weapon of war and in armed conflict".

The Peace Prize is the only one of the six prizes awarded outside Sweden, in Oslo, at the express wish of Alfred Nobel, as Norway was part of the Swedish kingdom at the time.