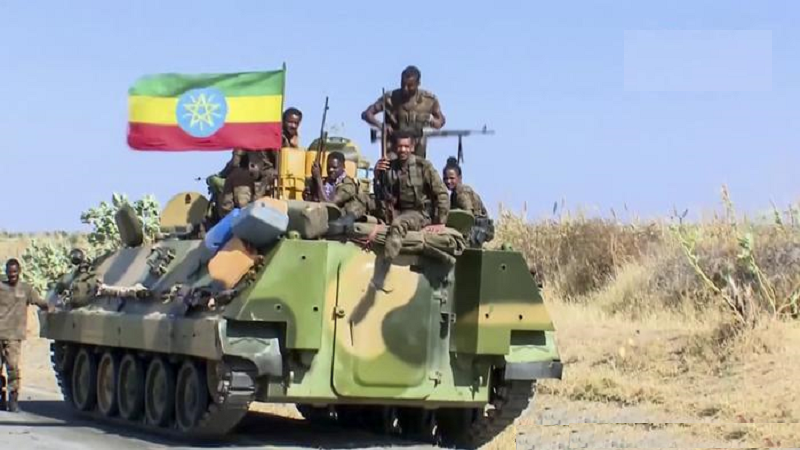 February 26, 2021 (GSN) - Ethiopian army-backed militias carry out fresh attacks on the crops of Sudanese farmers and retook control of a border area recently recaptured by the Sudanese army.

Sudan and Ethiopia now are in an open border conflict as the Amhara militiamen continue to carry out attacks on the farmers inside Sudan, while the Ethiopian federal army masses troop in the strained border backing the Fana gunmen.

Sudanese farmers on the border strip told the Sudan Tribune that the Ethiopian militias stormed again the al-Fashaga area and fired a hail of bullets causing great panic among the farmers.

The Ethiopian army deployed troops riding four-wheel-drive vehicles and troop carriers near the area of the attack, Bercht, inside the Sudanese territory to protect the assailants in case the Sudanese army intervene during the attacks.

The local farmers called for the establishment of a permanent military station in their area fearing attacks by the Ethiopian militiamen.

At the same time in Addis Ababa, Dina Mufti, Spokesman of the Ethiopian Foreign Ministry repeated his accusations that the military component of the Sudanese government "trumpeted" war against Ethiopia to serve a third party.

He further went on to say that the Sudanese army has to withdraw troops from the Ethiopian territory.

"Our standing has always been consistent, the Sudanese army has to withdraw from our land, then we will start to negotiate and solve the issue through existing mechanisms".

Sudanese government rejected the Ethiopian claims that Sudan was seeking war to serve the Egyptian interests. Also, it stressed that the issue of al-Fashaga is a national issue.

Sudanese officials say this is the first time since 1903, the Ethiopian government rejects the border demarcation agreements between the two countries.

The Sudanese foreign ministry spokesman said that Ethiopia has to prove its claims when it speaks about the ownership of the al-Fashaga area, adding that Sudan has the treaties and agreements challenging these claims.