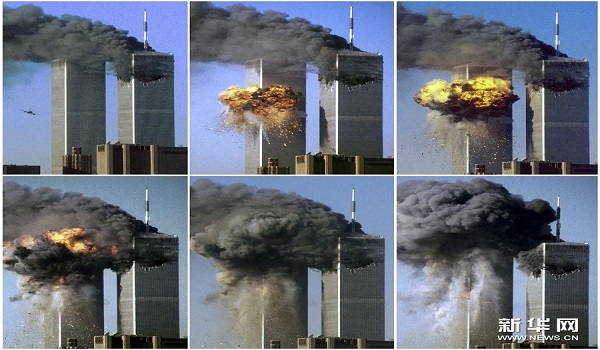 September 11, 2016(GSN) - The days following the September 11, 2001, attacks were marked by political solidarity over confronting America's enemies. No longer. As the 15th anniversary of the horrific attacks approaches Sunday, the political world is bitterly divided on how to address terrorism and national security.

Donald Trump dominated the GOP primaries after breaking with key elements of his party's post-9/11 ethos. He blamed former President George W. Bush, whose original response to the attacks sent his approval ratings to historic highs, for the terrorist strike. And Trump has proposed banning Muslims from entering the United States. Though he's softened the proposal somewhat in gearing up for the general election, his stance still represents a dramatic departure from Bush's visit to the Islamic Center of Washington, DC, six days after the attacks to proclaim "Islam is peace."

Today's political climate is a far cry from the days when Hillary Clinton, a freshman senator from New York, and then-New York Mayor Rudolph Giuliani came together to console grieving New Yorkers in the days after 9/11. Now Giuliani is one of Trump's top supporters, who repeatedly trashes Clinton.

For her part, Clinton, now the Democratic nominee, is still reckoning with decisions she made in the charged climate after the attacks, facing questions this week about her 2002 vote in favor of authorizing the Iraq War.

Meanwhile, Americans are more likely than five years ago to feel fear and anger when they think about what happened on September 11, according to a CNN/ORC poll released Friday.

Even talking about terrorism in the current atmosphere can spark political controversy, with the nation's leaders squabbling over whether to label the threat "radical Islamic terrorism."

The current commander in chief regularly faces media and political blowback in his attempts to argue that though terrorism is perilous, it does not represent an existential threat to the nation.

Meanwhile, Guantanamo Bay -- opened in the aftermath of September 11 to house foreign enemy combatants -- is still open, as President Barack Obama's vows to close it have been stymied by Congress. Clinton and Trump spent the last few days feuding over the Iraq War --with both trying to outdo the other in their stated opposition to it.

Clinton voted for the war but now admits it was a mistake, while Trump says he was always against it even though he was on record backing it at the time. In both cases, the sea change shows the unraveling of unified public opinion on how to prosecute the war on terror.

And the fact that these issues remain such a core part of American political life as the nation pauses to observe the 15th anniversary of 9/11 reflects the enduring potential of terrorism to dominate the political conversation -- and explains why it is seen as such a potent tool by America's enemies.

With Syria in tatters, yet another new administration in Washington risks getting pulled into the morass of violence in the Middle East, a region US policies helped to splinter.

Judging by the plans so far unveiled by Clinton and Trump -- longer on tough talk than detailed new strategies -- of how to swiftly crush ISIS, terrorism is likely to be reverberating through US politics for years to come. And recent ISIS attacks have only heightened its impact on the current political environment.

Trump's decision to base his campaign around a vision of a nation under siege from foreign extremism may have contributed to the mood.

"It has made the 15th anniversary more charged than some of the recent ones," said Matthew Dallek, a George Washington University professor who has published a new book about the origins of Homeland Security in the 1940s.

"His message is we are losing this war, we are incredibly vulnerable, we are being overrun by Syrian terrorists," Dallek said. "He has contributed to that. A lot of people feel that."

Trump, seeking to undercut Clinton's claim that her experience as secretary of state uniquely equips her for the presidency, accuses his rival of botching a chance to make America safer.

"She refused to take accountability for failed policies in the Middle East that have produced millions of refugees, unleashed horror of radical Islamic terrorism all over, and made us less safe than ever before," Trump said of his rival in Ohio on Thursday.

Clinton is effectively accusing Trump of being ISIS' candidate over his calls for a ban on Muslim immigration and promises to reinstate waterboarding for terror suspects.

"They are saying, 'Please Allah, make Trump president of America,' "

Clinton said this week on Israeli television, arguing that her opponent's positions alienate Muslims to the benefit of ISIS.

"I'm not interested in giving aid and comfort to their evil ambitions," she said. "I want to defeat them. I want to end their reign of terror."

Whichever one wins the election will find out that the bitter politics of terrorism are often a distraction from the primary presidential function of keeping America safe.

In fact, despite fierce political differences between Bush and Obama and the hot rhetoric of the current campaign, there has been continuity in how America has fought the war on terrorism in the years since 9/11.

Obama streamlined his predecessor's approach and increased the lethality and frequency of drone strikes after taking office and can claim credit for having crushed the core leadership of al Qaeda. There is also broad agreement across the political spectrum on measures to protect the homeland and even for National Security Agency surveillance programs started under Bush and modified by Obama.

It is likely that for all the political back-and-forth in the campaign, a President Trump or a President Clinton would choose to keep many of the current administration's approaches in place.

The next president will have to deal with the long-term consequences of both Bush's decision to invade Iraq and Obama's decision to pull all US troops out. America's longest war, in Afghanistan, is still raging. ISIS is attracting adherents around the globe, while a host of other terrorist groups arm themselves.

Given public antipathy to sending hundreds of thousands of troops to Syria and Iraq, plans by Clinton and Trump to fight ISIS stress intensified air strikes, increased intelligence resources and an ideological challenge to the Islamic extremists. They also, however, mirror strategies Obama is already pursuing and don't seem likely to end the war quickly.

That's why Scott Mann, a retired Army lieutenant colonel and former Green Beret and Special Forces operative who conducted pioneering counterterrorism and counterinsurgency programs while serving combat tours in Iraq, Afghanistan and South America, said the next president must transform the politics of the fight against terrorism by steeling Americans for a fight that could last many more years.

He warns that launching air strikes and taking terror leaders off the battlefield may be effective in the short term but do not treat the underlying cause of terrorism.

Instead, Mann said, the US should send in troops to partner with clans and tribes in areas occupied by extremists in places like Syria and Iraq to empower local people to crush radicalism from the bottom up. Mann's son was 3 when 9/11 happened; now he's in the military himself.

"There is no end in sight," Mann said. "He is now on his path to become an Army lieutenant. That is quite a span of war -- for your kid to go to fight the war you didn't finish." Source:CNN