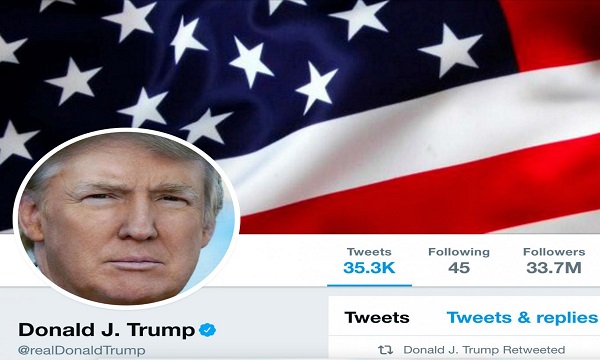 November 04, 2017 (GSN) - Twitter was thrust once again into a debate over the company’s ability to prevent abuse on its platform after a rogue employee, on the last day on the job, shut down the president’s personal account, @realDonaldTrump.

The deactivation Thursday evening by an unidentified customer service contractor renewed questions about the security of the Twitter account the president uses to set policy agendas and communicate to the world.

Twitter spokeswoman Emily Horne declined on Friday to answer questions about whether people at the company have the power to take over or close accounts.

The company released a statement on Twitter on Friday: “We have implemented safeguards to prevent this from happening again. We won’t be able to share all details about our internal investigation or updates to our security measures, but we take this seriously and our teams are on it.”

An industry official familiar with Twitter’s systems said the company has ways to prevent employees from tweeting from accounts that are not their own. The person declined to answer further questions about the matter.

President Trump has used Twitter in unprecedented ways, sharing his thoughts about national policy, his own appointees and even the leaders of other countries. He once took to Twitter to call Kim Jong Un, the leader of North Korea, “Little Rocket Man.”

That penchant for social media has worried national security experts, who have said that Trump’s Twitter account could be vulnerable to hacking — or that impulsive tweets, read the wrong way, could spark a national security crisis. Researchers have said that foreign agencies are also using Twitter to analyze Trump’s personality and track his habits.

But some analysts said an 11-minute shutdown of the president’s account did not amount to a national security risk.

“Is that a national security problem? I think that may be going too far,” said Kurt Opsahl, general counsel of the Electronic Frontier Foundation. “It is bringing to light that it’s possible for a rogue employee to do something of this significance. And so I imagine it would lead to some consideration on the part of social media companies whether there will be further checks and balances.”

Lawmakers are already scrutinizing Twitter over the widespread exploitation of its platform by Russian agents, who created more than 2,700 fake accounts and 30,000 bots to promote divisive and pro-Trump messages during the 2016 election — figures the company disclosed for the first time in congressional testimony this week.

he deactivation of Trump’s account, which occurred around 7 p.m. Thursday, only deepens the company’s political challenges, heightening the perception that it cannot manage its own platform.

Initially, at 8:05 p.m. Thursday, Twitter tweeted that Trump’s account had been “inadvertently deactivated due to human error.”

Two hours later, the company admitted that the incident was not accidental: “Through our investigation we have learned that this was done by a Twitter customer support employee who did this on the employee’s last day. We are conducting a full internal review.”

Some took to Twitter to make light of the incident, thanking the unnamed employee for silencing the president. But others on Twitter raised questions about whether the worker could have taken over the account and tweeted about a fictional nuclear strike on North Korea.

At 3:51 a.m., Trump chimed in, tweeting in a tone that was more sanguine than usual. The tweet contained no exclamation points or words in all caps, and it did not include a pointed attack.

“My Twitter account was taken down for 11 minutes by a rogue employee. I guess the word must finally be getting out-and having an impact,” the president tweeted.

“Twitter is not safe for anyone,” said Utsav Sanduja, chief operating officer of Gab, a social network that bills itself as a pro-free speech alternative to the bigger platforms run by tech giants. “This is a very flawed company that goes on arbitrary political bends and doesn’t have proper mechanisms for restraining this. This isn’t an isolated incident.”

Both Democrats and Republicans have criticized Twitter in recent months.

Liberals have complained that Twitter aided Trump’s election by facilitating the spread of fake news and did not aggressively close fake pro-Trump accounts.

Last month, the company blocked, and then restored, a campaign video ad by Rep. Marsha Blackburn (R-Tenn.), who talked about her effort to “stop the sale of baby body parts” in a reference to false claims about Planned Parenthood.

Even some of the company’s executives now say they worry that the platform has been used to stoke social divisions. Earlier this year, a co-founder of the network, Evan Williams, said that Trump’s election highlighted deep problems with the way social media platforms “dumb the world down” and undermined the public’s perception of truth.

On Friday, Twitter employees who came to work for the regularly scheduled companywide volunteer day, called Twitter for Good, also encountered an email telling them not to talk to the media, an employee said. A daily communication that alerts employees about the previous day’s blocked accounts did not go out, causing some consternation among workers.

Whether Twitter pursues legal action against its former worker, federal officials could be motivated to prosecute the person — if only to deter future cases, analysts say.

“If I were this employee, I’d be hiring a good criminal defense lawyer who knows something about the CFAA,” said Paul Ohm, a law professor at Georgetown University, referring to the federal Computer Fraud and Abuse Act.

“Everybody is asking why the Justice Department (and FBI) isn’t looking into all of the dishonesty going on with Crooked Hillary & the Dems ...” Trump tweeted, one of several missives he fired off Friday morning. (The Washington Post)

Hayley Tsukayama and Brian Fung contributed to this report.