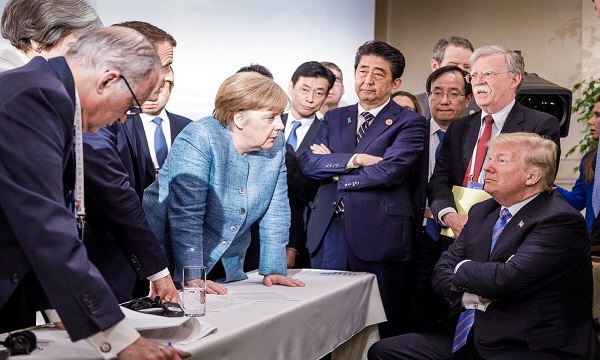 The mood was captured in an already iconic photograph showing Trump sitting, his arms crossed in a defensive posture, while German Chancellor Angela Merkel, surrounded by the other leaders, leans across the table at him. Trump looks like a defendant who has just been found guilty by a jury of his peers.

After the meeting, Canadian Prime Minister Justin Trudeau did not mince words, calling the U.S. tariffs “insulting” and saying: “Canadians, we’re polite, we’re reasonable, but we also will not be pushed around.” The G-7 ended in unprecedented nastiness with Trump, who had left early, blasting Trudeau as “very dishonest & weak” and instructing his representatives not to sign the joint communique.

On Sunday, Trump’s aides piled on, with Larry Kudlow accusing Trudeau of a “betrayal” and Peter Navarro saying there’s a “special place in hell” for the Canadian prime minister. No U.S. officials have ever spoken this way about any U.S. ally, ever. These are the kind of words that normally precede military action. (Washington Post)