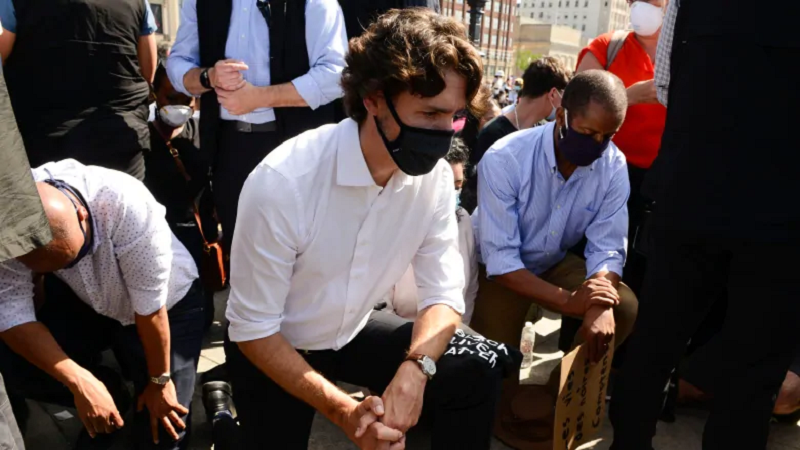 June 06, 2020 (GSN) - Prime Minister Justin Trudeau made an appearance at an anti-racism protest on Parliament Hill, showing up unannounced to hear speeches from activists demanding fairer treatment from police for minorities.

Trudeau joined the large crowd in kneeling for eight minutes and 46 seconds which is how long a Minneapolis police officer held down George Floyd with his knee on his neck before he died. The African-American man died while in police custody on May 25; all four officers at the scene now face charges.

Protesters in other cities have asked police officers to kneel to show respect for black people who have been killed in police custody. Toronto Police Chief Mark Saunders also took a knee during a protest in that city.

Trudeau tried to blend into the crowd but TV cameras and the RCMP security detail made his presence known to the roughly 4,000 activists gathered around the Centennial Flame on the lawn at Parliament Hill. Trudeau told his security detail to stop pushing people as he made his way closer to the stage where the speakers were addressing the crowd.

The prime minister clapped as the assembled speakers chanted "black lives matter" and called on those in power to do more to address systemic racism.

Someone in the crowd handed the prime minister a T-shirt with that slogan emblazoned on the front.

Trudeau was accompanied by Families Minister Ahmed Hussen, a Somali-Canadian who has spoken out about the racism he has faced in Canada.

"I think it's powerful when you have the head of government taking a knee and clapping when people say 'black lives matter,'" Hussen said. "It's incredibly powerful for him to come and be part of this."

The crowd on hand for the Parliament Hill protest was a multi-racial cross-section of the city, something Hussen said gives him "a lot of hope in the future."

After the speeches, the protesters moved down Wellington St., which runs right in front of the Prime Minister's Office in downtown Ottawa.