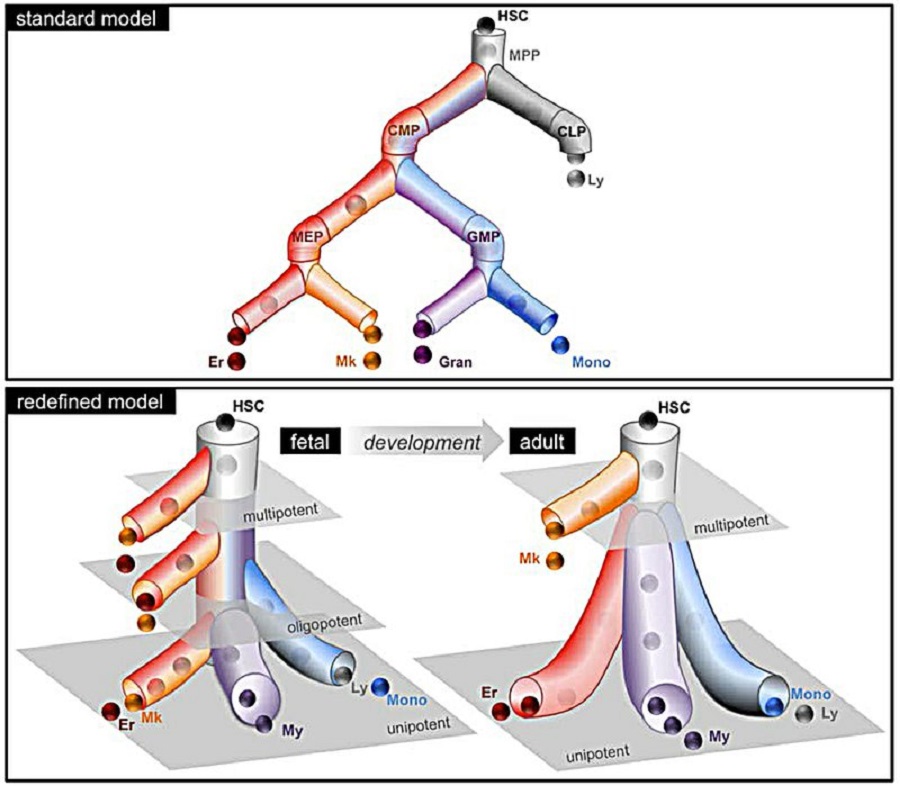 In a finding that could rewrite biology textbooks, a study published Thursday in Science finds that human blood is made from stem cells in a far different way than the currently accepted theory.

The study proposes that hematopoietic stem cells take only a few steps to differentiate into adult red and white blood cells. Conventional theory holds that the stem cells go through a number of intermediate steps, like a tree trunk producing branches, then twigs to make leaves.

A model of the changes in human My-Er-Mk differentiation across developmental time points. The standard model is shown at top for comparison. The redefined model proposes a shift in blood cell development from the fetus, where many stem and progenitor cell types are multipotent, to the adult where the stem cells are multipotent, but the progenitors are unipotent. The grayed planes represent theoretical tiers of differentiation.

A model of the changes in human My-Er-Mk differentiation across developmental time points. The standard model is shown at top for comparison. The redefined model proposes a shift in blood cell development from the fetus, where many stem and progenitor cell types are multipotent, to the adult where the stem cells are multipotent, but the progenitors are unipotent. The grayed planes represent theoretical tiers of differentiatiIf confirmed by independent researchers, the new model will give insight into how the hematopoietic process goes wrong in blood cancers, and why some are rarer than others. It could also help researchers better understand how to coax stem cells to produce desired blood cell types.

The study was led by researchers from Princess Margaret Cancer Centre at the University of Toronto. John E. Dick was senior author; Faiyaz Notta was first author.

Moreover, the study says the process differs in fetal and adult blood formation. The change from fetal to adult hematopoiesis appears to happen around the time of birth, Dick said.

Dick said the existence of two types of hematopoiesis could provide a clue for the origins of certain childhood blood cancers. These may actually arise from cells produced by fetal hematopoiesis that have begun to acquire mutations that lead to cancer. The process could take years to complete, and during that time the children would show no symptoms.

"If this work is replicated by other groups, we rewrite the textbooks," Goldstein said. "First, there's this very major shift in how blood cells are built from the fetus to the adult, and second, the adult lineage relationships are completely different thank what we thought."

Goldstein said the study looks solid and has no obvious errors.

"It's the right kind of analysis and relies on surface markers, which we've known always seems suspect, and the methodology seems sound, and it's from a group with an excellent reputation," Goldstein said.

Replication by other groups may take some time, Goldstein added, because the researchers used new technology that is just beginning to become widely available.

To get their findings, researchers studied nearly 3,000 human blood cells taken from 33 different sources of stem and progenitor cells, derived from blood of people of different ages, including umbilical cord blood from newborns.

They found that by adulthood, most of the progenitor cells, which arise from stem cells, are "unipotent," that is, they can give rise to only one mature cell type.

The standard model holds that hematopoietic stem cells progress in development through a hierarchy of multipotent types. In this model, the most plastic give rise to other cell types that are progressively limited as to which mature cell types they can turn into.

Dick and Notta also collaborated to isolate the root hematopoietic stem cell type, which is capable of becoming any blood cell. Their work was published in 2011, also in Science.

Regenerative medicine provides one of the most obvious applications of the study, Dick said.

"There are groups that are trying to harness megakaryocytes, to make platelets," Dick said. "The textbook view is that megakaryocytes come out of the long end of a pipeline ... But our data show that the split of making megakaryocytes comes off much more quickly, right off a stem cell compartment directly."

One deduction from this new picture of hematopoiesis is that there are more precursor types of blood cells. In addition, researchers now have a clearer picture of what a megakaryocyte precursor is.

"If I'm engineering a megakaryocyte precursor from a pluripotent stem cell, with this new data I have better idea of what I should be aiming for, when I'm trying to optimize my methodoogy," Dick said. "The same thing should be true for erythrocytes and so forth."