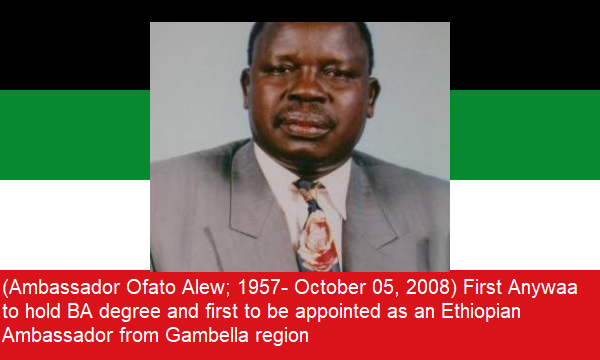 Ambassador Ofato [aka Opatho] was born to his father Alew Ochan and his mother Dhorgi Olok in Perbongo kebele, Abobo woreda of Gambella Reginal State. He was the first Anywaa in the Gambella region who graduated with a BA degree and the first Anywaa to be appointed as Ethiopian Ambassador.

After completing his elementary education in Gambella, Ambassador Ofato, went to Dembi Dollo, Wellega in September 1977 where he attended 11th and 12th grades. Bethel Evangelical Secondary School (BESS), where he attended his high school, was one of the most popular private schools in the Western part of Ethiopia.

At the time, Gambella did not even have a single high school. However, Ambassador Ofato persevered and he paid school tuition from the money he saved when he was teaching at Pokow elementary school. Most of the students from BESS joined universities in the country because of the high results they scored in Ethiopian High School Leaving Examination. He was one of those who scored high results in the national examination. He, then, joined Addis Ababa University in 1980 where he studied English at the Department of International Languages. He was the first Anywaa who graduated from Addis Ababa University with BA in foreign languages.

Ambassador Ofato started his career in the Ministry of Information as a journalist from 1983 to 1991. He was an English newspaper editor in the ministry of information. In 1990, he was sent to the United Kingdom to upgrade his journalism skills.

He was also the first Anywaa to be appointed as an Ethiopian Ambassador and also the first Anywaa to reach such great height in the Ethiopian Government system in more than 3000 years of Ethiopian history. As Ambassador he served in the Sudan and Kenya. These two neighboring countries, in terms of security, were critical areas for the survival of the transitional government and required someone with journalism experience to encounter negative campaigns of opposition political parties based in Nairobi and Khartoum. Ambassador Alew had contributed a lot towards the weakening opposition political parties in those two countries.

He was recalled to the Headquarters of the Ministry of Foreign Affairs in Addis Ababa in September 1995 where he served as an advisor in the office of the Vice Minister of Foreign Affairs. Later on, he served in various departments of the ministry of foreign affairs including General Directorates of Policy and Planning as well as that of press, information, and documentation.

While in Addis Ababa he also served as an amateur volunteer on the Executive Committee of the Ethiopian Football Federation. He was a member of the committee and coordinator of Public relations of the Federation.

Ambassador Ofato Alew was a strong activist who fought for democracy to prevail in his country among his people. He contributed to strengthening Gambella Peoples Liberation Movement (GPLM) during the struggle against the Communist regime and later played a great role in the formation of the Gambella Peoples Democratic Congress (GPDC).

Ambassador Ofato Alew was a responsible husband and father. Two of his children are attending Universities. One of them is at Addis Ababa University, Ariet Kilo branch, and another one is at Harare University. Two of his elder children are now working in Gambella.

Ambassador Ofato Alew Ochan passed away on October 5, 2008, in Addis Ababa, Ethiopia at the age of 51. His funeral was conducted at the Holy Trinity Church on October 6th, 2008. May his soul rest in peace!!