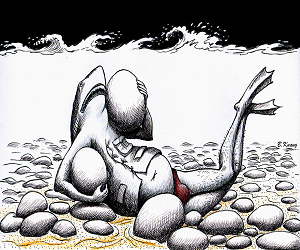 Calgary, Canada, March 25, 2013 (GSN) - We wonder till this day how this individual Odol Ojulo, who call himself Diaspora politician have affected the New Gambella. It is very important to understand the composition, nature and mindset of such people not because they are major threat to the progress made by our State but it has a potential to paint a negative image of our country in the world.

Your encounter interview on so called “Anyuak Radio Online on March 24, 2013 and threats post on Group so Called “Anyuak Generation Next on March 06, 2013 by fake name profile and IPP address “Anywaa Omot, who threaten to kill Gambella officials and supporters including Gambella President Ato Omot Obang Olom will not go unpunished.

This brief article attempts to look in to the various aspects of the so-called Gambella Diaspora Extremists.

Who are the Gambella Diaspora extremists?

These are different groups of people disdained by the current system in one way or the other. There are GPDUM-EPRDF three major groups that call themselves Gambella Diaspora extremists;

These are people who failed within EPRDF because of their unprogressive ideas in the long journey of EPRDF. These groups of people have many reasons to hold grudges and negative envy about the dynamism of EPRDF and the country it is leading. We don’t see something good coming from this group for Gambella as the main motto of this group is to get squared with EPRDF and its leaders. Look at Odol Ojulo and others who were part of the system at one point in the journey of, their view is redundant and all negative. This group of people does not base their politics on objective analysis of the current Ethiopia but on personal vendetta.

These groups are the typical extremists groups in Gambella. These groups see Gambella in their own lenses and have unrealistic desire to sit in the throne. They couldn’t see Gambella progress unless they are in it with power to squash others. These groups have been repeatedly rejected by the Gambellan peoples and have failed in their numerous attempts to seize power. They would not hesitate to use any opportunity that comes their way to sit in the throne. We have seen them working against the interest of Gambella such as making plans to destabilize Gambella in collaboration with Eritrean junta, and closely working under the umbrella of terrorist groups in Somalia such as Al-Shabaab. They work under the principle of ‘The enemy of my enemy is my friend’. When a group sets itself to seize power by whatever means available, it falls short of objective analysis of the situation of the current situation of the new Ethiopia. Its politics is based on animosity and hate. They want to propagate violence, instability, influence Western diplomats not to support the development of Gambella; they daydream to see a failed state so that they can have a short cut entry to power. These are very dangerous groups of people who leave no stone unturned to seize power. They put all their wealth and fame to support such cause; the shortest way possible to throne is preferred very well and gets a lot of resources from likeminded people. These are very few people in the Diaspora who believe that if they are not in power, they don’t feel part of Ethiopia or anything that it stands for. This is a grave mistake of judgment; often these groups of people cannot distinguish between national interest and national politics. These groups of people have worked hard to frustrate the effort of the Ethiopian people in using their God given resources such as volunteers’ Villagization and foreign investment farming in Abobo for their own benefit. Such double standard of such group emanates from their true nature. This reminds us about an Ethiopian saying that goes like this ‘ እኔ ከሞትኩኝ ሰርዶ አይብቀል’. Such groups are not capable of putting in place a better system in Ethiopia, which is more inclusive. Their excessive lust for power has blinded them to see the progress that Ethiopia has made. Our prediction is that groups will likely be very corrupt when they come to power, uncompromising and will reject pluralism in Ethiopia.

These groups of people does not require description as they put Ethiopia to the list of failed sate by putting in place a bloody system that destroyed Ethiopia as we know it today and took the county back the dark ages and led Ethiopia to the verge of total collapse. They have let Ethiopia to be one of the heavily indebted countries in the World. We believe people can change but the change has to come within and what they say and do does not give us the confidence these are the types of people that Ethiopia wants to look back at this point in time.

What is the contribution of the extremists Diaspora to Ethiopian politics?

Gambella Diaspora extremists politics has been there for ages but it has become very vocal in the past 10 year or so and the advances in ICT has contributed to easily spread their views, which is usually distorted and helps to misinform the majority of Gambella Diaspora, which does not have other sources of information to check, verify and triangulate news and views sent from such Gambella Diaspora groups who have their own hidden mission. The Gambella Diaspora extremists have also effectively used social forums and media including the Anyuak community gatherings, churches, famous singers and artists and recently TV programs such as ESAT, facebook, Youtube and twitter to some extent. Such forums are preferred to spread their views and by in large were counterproductive to the development of Gambellan and Anyuaks extremism. Mostly, their news and views does not have dependable sources and does not reflect what is happening on the ground. They send their view and suspicions as news to the Gambellan and Anyuaks Diaspora.

The common characteristics of the Gambella Diaspora extremists are that they are so detached from the day-to-day developments of the region. Hence, their view and aspiration does not take in to account the aspiration of the common person, groups, nations and nationalities in the country. The New Gambella and Ethiopia has moved from hate politics and has set common development agendas for the country, clear and just regional budget allocations and utilization, decentralized power sharing system whereby nationalities feel included and not rejected as in previous systems, and time and again it has proved that it is the country to be reckoned and is playing an increasing role in regional and international politics. It has become one of the African countries that are good examples in attaining holistic development. In light of this, the chicken politics played by Diaspora has little contribution, if any, to the political and socio-economic development of the country. It is not grown to the level of maturity that the Ethiopian people’s can trust and depend up on. Quite often the lack coherence in their strategy and alliances and more so they lack clear vision and agendas for the country. Hence, We don’t’ see changes coming to Ethiopia from these groups.

What is the alternative opposition politics in Ethiopia?

In Ethiopia opposition politics has been weak and were not able to take good opportunities that came in its way that would have contributed to the development and maturity of Ethiopian politics. Over the past five years, however, there are some good developments in the opposition parties and collations in the country. We are seeing trends of constructive engagement and a clear move from hate politics. Such development is the result of continuous peaceful and arduous struggle and this trend should continue. The incumbent government has the responsibility for putting in place a playing level field that promotes the politics of pluralism in Ethiopia. We want to see the progress of Ethiopia on a continuous basis and more concerted effort to take this beautiful country of ours to the next level. Let us believe in us for a peaceful and smooth transition of powers and stay away from chicken politics!

God bless Ethiopia and Gambella, our country and my home as well.

Edited by Gur Omot and Ojulo Aballa, Can be reached @ This email address is being protected from spambots. You need JavaScript enabled to view it.