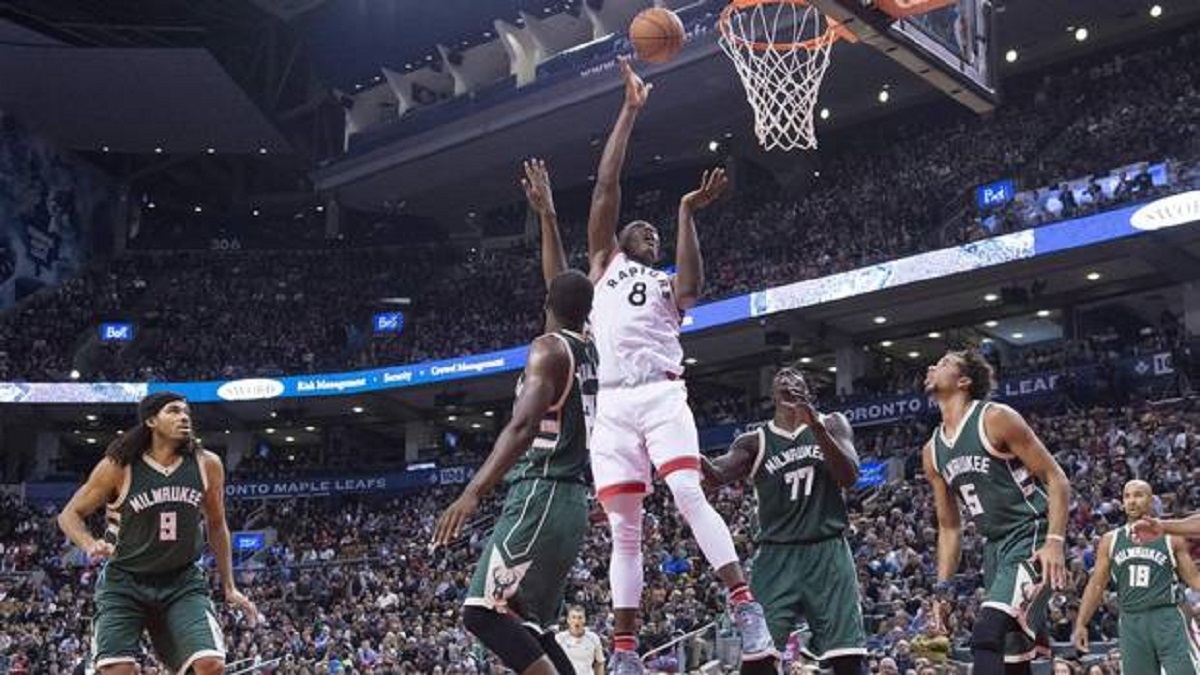 Toronto, November 01, 2015 GSN) - For just the third time in franchise history, the Toronto Raptors have begun the season 3-0. Six Raptors scored in double digits as they throttled the winless Milwaukee Bucks 106-87, padding their record before heading off to play 10 of their next 12 on the road.

“This road trip is gonna be a bear,” said Dwane Casey, whose 157th win Sunday makes him the coach with the most wins in Raptors history. “We’ve got some quality teams coming up, at their place, hot gyms, and it’s going to be a great test to see what we’re made of. I think this group is tough.”

Jonas Valanciunas led the way with 19 points and eight rebounds, while Patrick Patterson had 16 – hitting four of five three-point attempts. DeMar DeRozan and Lowry each added 15 and DeMarre Carroll had 14. Terrence Ross, adjusting to his new role off the bench, had an 11-point fourth-quarter burst.

The Raptors led at the end of the opening quarter for the first time this young season. They jumped out 24-19 on the strength of solid ball distribution by Lowry, sharp three-point shooting by Carroll and Patterson and rebounding dominance from Bismack Biyombo (part of a 10-board night for the newcomer).

After making only 11 of his first 24 field-goal attempts in his first two games of the season, and leaning on free throw opportunities for his points, DeRozan made his first five shots from the field on Sunday. Newly added Luis Scola came alive with big boards and buckets. Toronto led by as much as 17 in the second quarter and took a 55-41 advantage into the locker room.

In contrast to their first two games of the season, Toronto came out of halftime allowing its opponent to surge in the third quarter – Milwaukee scoring 30 to Toronto’s 26. Milwaukee’s Giannis Antetokounmpo, a 6-foot-11 rising star known as the “Greek Freak”, had been held to six points in the first half. He erupted for 11 in the third quarter alone in what would be a 20-point night. Toronto was still ahead by 10 going into the fourth.

Ross, who had been quiet for Toronto earlier in the game, showed he’s finding his groove as a part of Toronto’s bench after two inconsistent seasons as a starter. He contributed 11 fast points, had big defensive plays, and drew opponents out of the paint, following up a 21-point effort on Friday night versus the Boston Celtics.

On an evening when many of Toronto’s new additions prospered, a familiar old face was in town too. Greivis Vasquez visited for the first time since the Raptors dealt him in June. The loquacious backup point guard, known for his shoulder-shimmying celebrations as a Raptor, was traded to Milwaukee on draft night in exchange for the Bucks 46th overall selection, Norman Powell, and a future first-round pick.

“It was hard man – extremely hard – because I was so engaged with the city, the fans, the team, but it’s part of the business so you’ve got to move on real fast,” Vasquez said of the trade.

“We didn’t do a good job at the end of the season, so it was going to be either me or Lou [Williams], and it was both … and Amir [Johnson]. It was tough, man, we had something really good. We were the No. 1 team in the East for 61 days and people really expected a lot from us and we didn’t fulfill those expectations.”

Vasquez, who was averaging 9.5 points and 3.7 minutes over 23 minutes a night coming off the bench for Michael Carter-Williams, had nine points and four assists on Sunday.

Toronto plays in Dallas, Oklahoma City, Orlando and Miami before returning home for a very brief home stint against the New York Knicks on Nov. 10. ( The Globe and Mail)