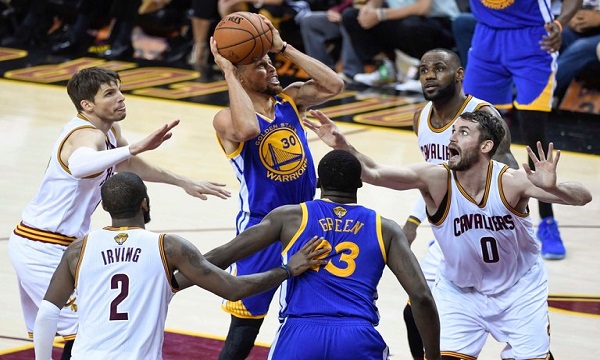 June 07, 2017(GSN) - In an absolutely stunning defeat, the Cleveland Cavaliers, after leading for much of the second half, fell apart in the closing seconds of Game 3 of the N.B.A

In the final 3 minutes 10 seconds of Game 3, the Cavaliers saw their chances of an upset in these finals all but evaporate. The Warriors closed the game on a huge run that was all Stephen Curry and Kevin Durant, with Durant’s 26-foot 3-pointer with 45 seconds remaining putting the team ahead to stay, 114-113.

“I’ve been working on that shot my whole life,” Durant said of his 3-pointer over LeBron James. “For that one to go in was liberating.”

The run seemed to come out of nowhere, with LeBron James and Kyrie Irving of the Cavaliers dominating for much of the second half, combining for 77 points in the game. The two-man offensive show was simply not enough, even with a solid contribution from J.R. Smith, thanks to the Warriors’ stacked lineup. Klay Thompson, Durant and Curry combined for 87 points; Durant led the way with 31, and Curry improbably tied Kevin Love as the game’s top rebounder with 13.

“It wasn’t our smartest game that we played all year, but it was probably our toughest,” Warriors Coach Steve Kerr told reporters after the game.

Cavaliers Coach Tyronn Lue said after the game that he did not remember the 11-0 run well enough to comment on it.

With the win, the Warriors extended their postseason record to 15 consecutive games, and Game 4 on Friday offers a chance for them to become the first team to complete a postseason undefeated. Needless to say, no team has ever come back from a 3-0 deficit in the N.B.A. finals. But if there is a glimmer of hope for the stunned Cavaliers, no team had ever come back from a 3-1 deficit until last year — when Cleveland did that against Golden State. (NBA)