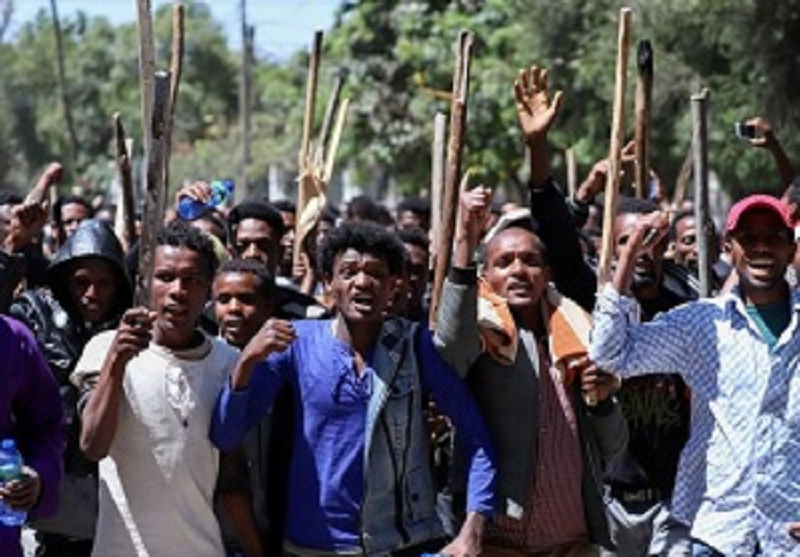 September 09, 2022 (GSN) -- Nations are built by the autonomous and unified strivings of citizens. Contrariwise, nations are destroyed by crowds who operate blindly to fulfill petty and irrational goals.

Crowds may originate from various elements. In Ethiopia, they emanate from the catastrophic element of race and ethnicity. Currently, we are witnessing crimes against humanity in various parts of our country, and they all point toward crowd leaders and their hypnotized followers. The effort of the government to put a halt to these atrocities becomes futile when citizens abandon national identity and form ethnic factions. These ethnic cliques are led by crowd leaders deranged by lust for power and money.

Crowds and their leaders have a symbiotic relationship, and the destruction of one necessarily leads to the end of the other. In the following sections, I will focus on the mentality of crowds and reserve the discussion on crowd leaders for the next. This is because their leaders operate by manipulating the characteristics of the crowd and can only be understood in the context of the latter.

Upon closer scrutiny, the various crowds begin to resemble one another in their mentality and the causes that lead to their emergence. Gustave le Bon in his 1996 book, ‘The Crowd’ provides us with distinct characteristics of a crowd. Since we are talking of crowd mentality, it should be considered psychologically as the formation of a collective unconscious mind at the expense of autonomous rationality. One distinct feature of a crowd is their capacity to do things individuals cannot.

The individual who possesses dark thoughts is prevented from acting them out of fear and social moral values. But a crowd is not prevented by social values because it is ruled by unruly instincts which represent not the civilized, but rather the primitive human. Unless suffering from severe mental illnesses, individuals are incapable of committing crimes we witnessed in Metekel and other areas in Ethiopia. It is impossible for an individual to slaughter innocent infants and elders, but a crowd is capable of such monstrosities.

The response of crowds to these crimes is truncated since they only feel the pain of their crowd identity. Accordingly, when a national response is needed in Ethiopia, we only have an ethnic response. To show the nature of individuals in a crowd, Gustave le Bon argues, “Like a savage, … The notion of impossibility disappears for the individual in a crowd.” This is because only individuals possess rational and moral mental faculties. But a crowd is possessed by the power in number, then only savagery and primal instincts become the guide.

The most important point is that, unlike an individual, a crowd is the manifestation of instincts without rationality. The primitive tendencies in the civilianized individual reemerge as soon as he joins a crowd to make him do atrocious deeds. This is because we descend into a primitive existence, which civilization rid of generations ago. Just recall the many savage acts done by crowds. It is capable of burning a whole family, capable of slaughtering defenseless people with machetes, capable of killing their age-old neighbors and committing many similar cruelties. As we have seen recently, crowds are capable of killing the very people who have lived and died with them for so long. Gustave le Bon rightly depicts the crowd member in this way:

“Isolated, he may be a cultivated individual; in a crowd, he is a barbarian−−that is, a creature acting by instinct. He possesses the spontaneity, the violence, the ferocity … of primitive beings, … he allows himself to be impressed by words and images. … An individual in a crowd is a grain of sand amid other grains of sand, which the wind stirs up at will.”

Truly, we have seen intellectuals transforming into irrational brutes upon joining a crowd. In Ethiopia, the effect becomes catastrophic as crowds are formed by ethnic affiliation. To witness Ethiopian journalists, historians and politicians work for the demise of our country is verily unspeakable. Possessed by crowd mentality, they defend criminals. To see civilized human beings, stain the name of their own country in the international arena is enough to see the primitive power of crowds in Ethiopia. Gustave le Bon remarks of a crowd, ‘the learned man and the ignoramus are equally incapable of observation’ because they are driven by a herd instinct.'

Crowds show primitive tendencies that are alien to the civilized modern human being. Firstly, they are excitable to external forces and act impulsively. Secondly, crowds are incapable of making logical connections since they think in images and generalizations without critically analyzing specific facts. Gustave le Bon argues that crowds are ‘slaves of impulses’ and ‘think in images that lack logical connection with one another. They forgo their individual moral responsibilities because each thinks he/she is one among many. We are currently witnessing such a crowd mentality all over the country, and it is vital that people wake up from the hypnotic effect of the crowd. The above realities show how crowds transform history into myth and great men into legendary heroes depending on the current wave by which they are possessed.

There are various causes that create a crowd mentality, with power in number and suggestibility as the guide. The individuals in a crowd consider themselves powerful in number and consider themselves above reality and reason. They develop, as Gustave le Bon argues, “a sentiment of invincible power which allows them to yield to instincts.” They think in unison and just like a pandemic, their sentiment becomes contagious and felt by all. The individual is possessed by the sentiment of the crowd, which is invoked by crowd leaders. Sentiments immediately transform into action regardless of the danger to oneself and others. Their diabolical leaders exploit this sentimentality as, “to exaggerate, to affirm, to resort to repetitions, and never to attempt to prove anything by reasoning are methods of argument” used by crowd leaders. I will speak more of this in the next article, but for now, it suffices to state that ‘crowds exhibit a docile respect for force’ and take kindness for weakness. This is why, as we are witnessing in Ethiopia, crowds respect dictatorial and cunning leaders while exhibiting disrespect to democratic leaders. As history has shown us time and again, such madness never ends well. The crowds that followed Hitler and Mussolini did not do well. In recent history, look no further than the Yugoslav wars, the Somalia anarchy, the Rwandan genocide, and the despair in Syria. Ethiopia will not be an exception.

Engulfed in a crowd mentality, many of us have become the internal enemies of Ethiopia irrationally. In an archaic determination to protect one’s group and annihilate all others, each group is becoming a paragon of hatred. No one is stopping to realize that, our existence is determined by the existence of Ethiopia, home to all its citizens. Crowds with ethnic proclivities threaten the nation, their success can only bring mutual destruction. To guarantee our national and global prosperity, we need rational citizens but never crowds. This is a call to the rational and humane side in all of us. A nation is only as great as its citizens, and Ethiopia is in need of great citizens who are ready to strive for unity and mutual existence. I end with the words of the great Martin Luther King, Jr. in his 1968 work, ‘Where Do We Go from here: Chaos or Community?’:

“History is cluttered with the wreckage of nations and individuals who pursued this self-defeating path of hate. … Over the bleached bones and jumbled residues of numerous civilizations are written the pathetic words: “Too late.” … We still have a choice today: nonviolent coexistence or violent co-annihilation.” Source: Ezega. Abel Merawi is Addis Ababa-based contributor for Ezega.com. He can be reached through this form.