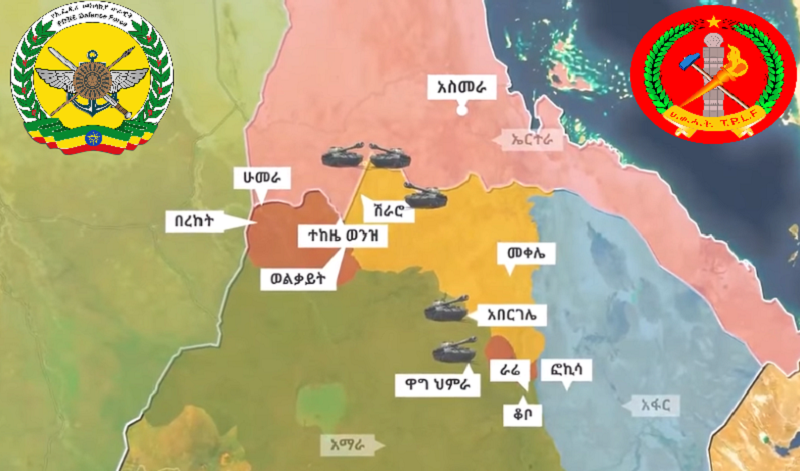 The talks would come after a series of airstrikes in Tigray, including one that aid workers say killed more than 50 people when it hit a school sheltering war-displaced people.

There have been reports of heavy fighting since hostilities resumed in late August between Ethiopia’s federal government and the country’s Tigray rebels, with dozens of civilians dying in airstrikes.

This latest round of fighting also has seen Eritrea renew its involvement in the conflict on the side of Ethiopia's federal military, with the Tigray leadership saying Eritrea has launched a “full-scale” offensive into northern Tigray.

Now, both the Tigray authorities and the federal government say they are ready to attend peace talks this weekend in South Africa sponsored by the African Union (AU).

According to the AU Commission, the talks will be led by AU special envoy Olusegun Obasanjo, who will be supported by former South African Deputy President Phumzile Mlambo-Ngcuka and former Kenyan President Uhuru Kenyatta.

However, the Tigray leadership has requested more information regarding the structure of the talks before attending them.

They have long criticized Obasanjo’s role as a mediator, seeing him as close to the Ethiopian prime minister, and have insisted that international officials participate in cease-fire discussions as “observers” and “guarantors.”

Ahmed Soliman, a researcher at the Chatham House think tank in London, said there are “credibility questions” hanging over Obasanjo as a mediator. But he added that the talks could lead to a breakthrough.

“If these talks proceed in the next couple of days, they’ll be the first formal face-to-face, direct talks between the conflict parties,” he said. “And in that regard, there’s a huge opportunity to reset this mediation and try to build some confidence. Whether the opportunity is seized, of course, is another matter entirely. We’ve seen previous efforts not be successful, but I think what should be apparent is the seriousness of African partners [and] the international community to resolve this conflict.”

The Tigray leadership has insisted on four demands as part of any agreement to end the fighting. These are: “unfettered” humanitarian access to Tigray; the withdrawal of Eritrean troops; the restoration of the Tigray's communication and banking services; and the return of territory lost in the conflict.

A previous round of informal talks held in Djibouti last month broke down without an agreement after federal officials failed to give guarantees on the restoration of Tigray’s services, which have been shut down for more than a year.

Soliman said the South Africa talks — if they take place — will not settle these issues, but they could kickstart a longer-term political process that does.

“And that needs to be communicated through this process as a longer-term process toward ending this conflict, not just a one-time meeting,” he said. “These talks should be seen as a stepping stone, not an end goal, not to achieve the ambition of ending the conflict. Because that, they won’t do.”

Will Davison, an analyst with the International Crisis Group, said the talks are likely to discuss “procedural issues” rather than thorny substantive issues. He added that any deal could also be derailed by Eritrea.

“Even in a best-case scenario where the federal and Tigray parties are able to come to terms on all of their outstanding disagreements, there is nothing like a guarantee that would stop Eritrea’s approach, which is currently a military approach,” he said. “They have fully re-engaged in the conflict over the last month, and there is really no indication that they’re interested in [a] negotiated settlement with the TPLF and Tigray’s leadership. Instead, [it’s] reasonable to think they are looking for a military solution and the total defeat of the Tigray political and military leadership. So, Eritrea could well be a serious spoiler, even if these AU-mediated talks between the federal and Tigray governments go incredibly well.”

So far, the Tigray rebels and the federal government have stuck stubbornly to their negotiating positions. But with the cost of the fighting increasing every day, they might be persuaded to sign a deal that stops the bloodshed, at least in the short term. Source: GSN's Agencies