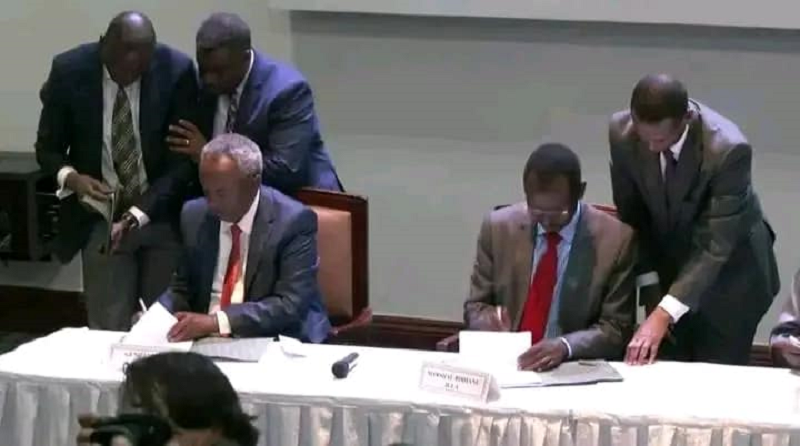 November 15, 2022 (GSN) - The Nairobi talk on the implementation of the peace agreement signed between the Ethiopian government and the Tigray People’s Liberation Front (TPLF) concluded in agreement.

Security advisor to Prime Minister Abiy Ahmed, Redwan Hussien, said “The Declaration of Executive plan of the Pretoria peace agreement has just been signed. Again, African Solutions for African problems have been upheld.”

Chief of the Ethiopian Defense Force, Field Marshal Berhanu Jula, and TPLF forces commander, Tadesse Worede, had been holding talks on the disarmament of TPLF forces, restoration of social services, and flow of humanitarian aid to the Tigray region.

Former Nigerian President who is currently the African Union special envoy to the Horn of Africa, Olusegun Obasanjo, has hailed the commitment to peace from both sides. He was the chief facilitator of the talk.

Leaked unofficial documents indicate that TPLF disarmament is to go hand in hand with the withdrawal of “Eritrean Forces and forces from Amhara region,” from the Tigray region.

It has also called on relevant bodies in the region to do their part to ensure the implementation of the agreement.

The Ethiopian government has announced that 70 percent of the Tigray region is under the control of the Ethiopian Defense Forces.

Many of the areas under the Ethiopian Defense Force have seen the restoration of services including banking and electric power.

According to the peace talk, the TPLF will not run the administration in the region. An interim administration is to be named by the Ethiopian government until the National Electoral Board of Ethiopia organizes a regional election.

The two years’ war claimed hundreds of thousands of lives and ruined infrastructures including health and educational institutions. The Ministry of Finance estimated that $20 billion is needed for the reconstruction effort in the war-torn areas namely Afar, Amhara, and Tigray regions.

While Ethiopians are applauding the agreement that is reached, there are strong voices that there is no guarantee that Ethiopia is not facing another conflict for they see the constitution and the ethnic-based administration as the source of the conflict.